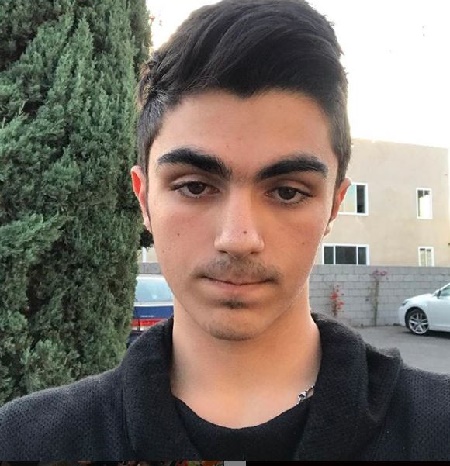 Do you know an American famous actor, Brian Austin Green? If yes then you are unquestionably familiar with his firstborn son, Kassius Lijah Marcil-Green, whom he shared with ex-fiance, Vanessa Marcil who is also an actress.

He was born on March 15, 2002, in the United States. He holds American citizenship and is of white ethnicity. Further, he has three half-siblings from dad's side named Bodhi Ransom Green, Noah Shannon Green, and Journey River Green. His grandparents are Peter Ortiz, George Green, Patricia Marcil Ortiz, Joyce Green.

Is Kassius Dating Anyone?

The 18 years old celebrity child who identifies himself as “certified gay" on his Instagram bio is an unmarried man. But currently, he's reportedly dating a man whose name is Ian Ward. The two partners seem to be together since 2019.

Now, scrolling his Instagram account, he frequently shares the cozy images with lover Ian alongside sweet caption. Lijah Marcil-Green shared their kissing photo with the caption "with my Love" on July 10, 2019. So, the two are so much in love with each other and happily enjoy their love life with no problems.

Apart from his love life, Kassius has never met his youngest brother and is not allowed to meet his father and stepmother until 2019 due to the custody issues. But, putting differences aside,  his mother Vanessa allowed Lijah to meet his father.

On Tuesday, July 16, he visited his dad on the set of BH90210, in Canada. “I’m visiting my dad in Vancouver on the set of 90210. We’re going to be staying here for a bit. He told his followers via Instagram Story. I’m here for a week,”  “I think we’re, like, staying somewhere near downtown.”

Kassius Lijah's dad, Brian, 46, and mom, Marcil, 51, were never in a conjual relationship but very close to tying the knot. The pair who first met on the set of Beverly Hills, 90210, in 1999 became engaged in mid-2001. But the couple ended their relationship in 2003 after three years of togetherness.

Since the division, the three Daytime Emmy Award nominations actress weds actor Carmine Giovinazzo on July 11, 2010, in a private ceremony in New York City. However, the ex filed for divorce in August 2012 saying " irreconcilable differences and their divorce was finalized in March 2013.

The Net Worth of Kassius Lijah

Meanwhile, there is no income source of Marcil-Green as he's enjoying her parent's assets being the son of millionaires. However, his mom, Vanessa Marcil shares a whopping $4 million worth throughout her acting work.

When it comes to his dad's net worth, Brian shared the combined net worth of $10 million as of 2020 with ex-wife, Fox. They have collected this heavy fortune throughout their own professional work as an actor and actress.