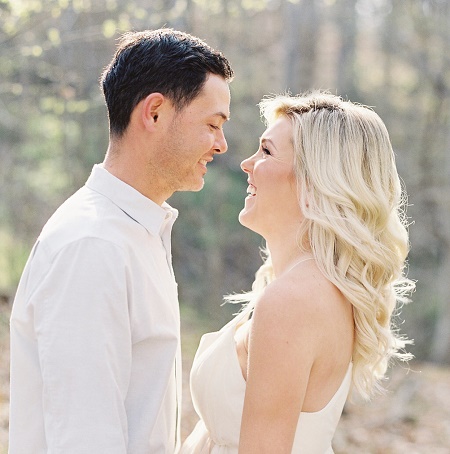 Athletic, Katelyn Sweet is happily married to her long-term boyfriend turned partner, Kyle Larson since 2018. Her partner Kyle is a professional American stock car racing driver and owner of the World of Outlaws Sprint car team.

In addition, Larson is the 2012 NASCAR K&N Pro Series East champion, and the 2015 Daytona 24 Hours and 2020 Chili Bowl Nationals Champion overall winner.  Besides this, Katelyn is known as the sister of Brad Sweet, a former NASCAR driver and a sprint racer from World of Outlaw.

Here’s what you need to know about Katelyn and Kyle's marital life.

Dated a Long Time and Got Engaged in 2017

Yes, it's very true the two have dated for a long time before marriage. Although Katelyn and Kyle did not make a clear declaration when they started dating, they seem to have been together for many years.

On December 22, 2017, the racer announced that he and his long term girlfriend got engaged via Twitter. He Twitted: "I know I know.... It’s about time!! Can’t wait to spend the rest of our lives together!! Off to New Zealand, we go!", with a diamond ring emoji.

After a year of marriage, they walked down the aisle in a private ceremony on September 26, 2018. At first, this news became public when Larson's team, Chip Ganassi Racing, shared the news on their Instagram posting a Katelyn and Sweet dancing photo together.

In the post of September 27, 2018, they congratulated the newly wedded Mr. and Mrs. Larson, and also wished them both a lifetime of happiness, joy, and checkered flags. Also, Ms. Larson posted an amazing wedding photo saying they had the most beautiful day possible on her Instagram.

More precisely, son Owen of the couple was also present at the wedding party. And since their big day, there is no doubt as they happily live their life without any controversy.

Before marriage, Katelyn and her spouse Larson who own the 2013 NASCAR Nationwide Series Rookie of the Year became parents. At first, on 22 December 2014, they gave birth to a baby boy named Owen Miyata Larson, reportedly 5 years old.

In 2017 Katelyn revealed she was expecting her second child in May 2018 on Instagram. Their younger daughter Audrey Layne Larson was welcomed on May 7, 2018, in the same year of marriage.

For now, there are several things that Kyle and Katelyn want to share with their kids as a young dad and wife. NASCAR driver, Kyle teaches the trades of being a guy to his son Owen, including changing a tire, wired socket, or tuning his engine. Where, like most girls, a girl Audrey has her dad wrapped around her finger.

Currently,  the entire family lives happily together and they both post a lot of photos of the children on their social media. They are also frequently pictured attending events in Kyle and are very supportive of his career.