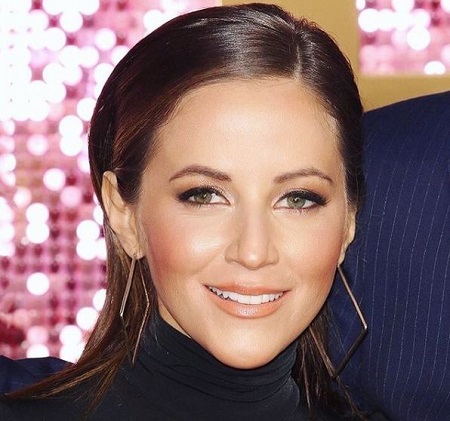 If you're watching the live NFL morning TV program, Good Morning Football, on NFL Network. Then you guys are familiar with the host Kay Adams who is an American sportscaster and TV personality.

Also, she works for DirecTV Fantasy Zone channel during football season. Prior to that, she has worked for several on-air hosting programs. Today in the following sections, the information you are looking for about her are given.

Does Kay Adams Have a Husband?

Thirty-seven years old Kay Adams has not tied the knot with anyone yet. So she has no one in her life whom she called her husband. When it comes to revealing her love affairs, she remains a super secretive woman

However, Adams was previously rumoured to be dating an NFL player, Danny Amendola. Together, they even captured cosy photos in several functions including ESPY award in 2015. She even posted a snap of herself and Amendola from the 2015 Super Bowl on her Instagram account.

After a year, it was reported that the couple parted their ways. However, neither Adams nor Danny denied or confirmed their love relationship. Since the breakup, the TV anchor Kay is living a happy single life without dating rumours.

How Much is Kay Adams Net Worth?

The 1.67 m tall Kay Adams must be making an impressive amount of money from her broadcasting career. She has an estimated net worth of more than $1 Million as of 2020. Olivia Harlan is another sportscaster with the same worth.

Regarding her salary, Adams makes an estimated $80,000 a year for hosting the GMFB on the NFL Network. She hosts the show alongside Nate Burleson, Peter Schrager, Kyle Brandt, Mike Garafolo, and Michael Robinson.

Similarly, she earns a good amount of income from the DirecTV Fantasy Zone channel.

Successful Career As a Football Host

Adams made her career breakthrough for hosting the St. Louis Cardinals at their home games. Then she began to work as a host for professional football fantasy shows such as SiriusXM Fantasy Drive, and SiriusXM's Livin' the Fantasy.

In 2013, Kay provided YouTube fantasy recaps for DraftDayMedia. She has also worked for other outlets, including FanDuel. Then on NBC Sports Network, she became the host of Fantasy Football Live. Finally, she began working for the Good Morning Football NFL Network as a co-host.

She furthermore hosts DirecTV’s Fantasy Zone during the footballing season. Added to that, she hosts a version of Millionaire on a mobile app where the public plays for the pot of money.

Kay Adams was born on April 6, 1986, in Chicago, Illinois United States. Her father's name is Czesio Adams while her mother's identity is unknown.

She has two elder siblings, a sister Sylvia Wrobel and a brother, Adamski. As per her education, she graduated with a bachelor's degree from Dartmouth College in Journalism. Further, she fluently speaks Polish and English.