home Biography Along With A Successful Marriage, Keely Shaye Smith & Pierce Brosnan Are Also Proud Of Their Children Accomplishment

Along With A Successful Marriage, Keely Shaye Smith & Pierce Brosnan Are Also Proud Of Their Children Accomplishment 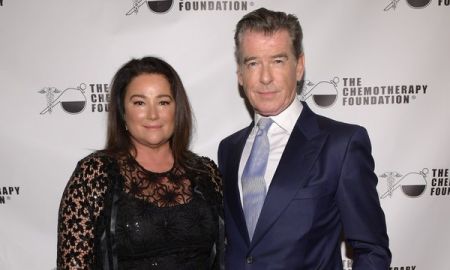 Keely Shaye Smith is a versatile personality in the field of entertainment, who found better after failing in originality rather than in succeeding in imitation. She is a world traveler, whose interests are in organic gardening because one touch of nature makes the world a beautiful place.

The native of California, Smith is an avid gardener, who adores the mother nature and wrote a book, The Weekend Gardener, which is about horticulture. Know more about Smith's personal life in the following sections.

Former entertainment correspondent of NBC's Today Show, Keely is spending quality time with her husband, Pierce Brosnan, an actor. The two walked down the aisle on 4th August 2001, at Ballintubber Abbey in County Mayo, Ireland.

The bridegroom were looking perfect at the time of wedding, where Brosnan was donned in a three piece black suit, a white undershirt, tied up with a white silver tie and a white handkerchief in his left pocket. Meanwhile, Keely wore a white long sleeve bridal gown with a lace floor length scarf.

The couple had their first meeting at a party in Mexico beach on 8th April 1994. After the musical night, the duo eventually started to link up regularly and found they're meant to be.

After ringing the wedding bells, Keely and Brosnan are living together as a happily married couple since 25 years since after becoming one soul. Keely recently wished Brosnan for becoming his valentine on the 14th February 2020.

Glamour model, Keely and her film producer, Brosnan are blessed with two children, who grown up as a successful personalities. They first welcomed, Paris Beckett Brosnan on 27 February 2001, and then their child, Dylan Thomas Brosnan was born on 13th January 1997.

The couple's older son, Paris is a successful filmmaker, who grabbed the attention with his first film, Your Voice Matters. He is also a model, who photoshoots for popular brands like Balmain and Dolce & Gabbana.

On the other side, the pair's younger son, Dylan is a musical artist, who performs as the lead singer of Raspberry Blonde band. Other than that, he previously came into attention with his prominent role in a short film, Iconic in 2015.

Keely became step-mother of three children, including two sons, Christopher Brosnan and Sean Brosnan, whom Brosnan adopted with his estranged wife, Cassandra Harris in the early 1970s. Unfortunately, Pierce's first child, a daughter Charlotte Brosnan (born in 1971) passed away on 28th June 2013, due to ovarian cancer.

Similarly, Pierce's former spouse, Cassandra became ill while filming in Rajasthan, India. Later, Harris left the world with sorrowness on 28th December 1991, due to ovarian cancer. Currently, there is only two member, including Brosnan and his second child, Christopher in their family.

How much net worth does Keely Shaye accumulate?

The American actress and journalist, Keely makes massive money from her various income sources. She worked for multiple companies, television channels and even created her own show, so that her net worth accumulates $20 million as of 2020.

What's more to this? Smith is reported to make more than $100,000 every year from her professional works. She also acclaims a hefty sum of fortune from her endorsement deals and news articles.

On the other hand, Keely's spouse, Pierce is one of the high-paid actors, who grasps a net value of $80 Million. So, the combined net worth of Keely and Brosnan is calculated to $100 million.

Smith's Journey from Modeling to Corresponding...

With a keen interest in becoming a famous figure, Keely first made her appearance on the MTV music video titled Stuck With You. The song ranked no.1 on Billboard Hot 100 for three weeks.

On the other hand, Keely is notable known for her production work in various television shows. Currently, she is the owner and host for an Eco-friendly PBS series, Home Green Home.

The celebrity couple began their activism in 1995, while working with International Fund for Animal Welfare and Natural Resources Defense Council. At that time, they helped to stop the salt factory construction at Laguna San Ignacio, California for environment protection.

Check out the interview of Keely Shaye Smith and Pierce Brosnan at 2018 UCLA Institute of the Environment and Sustainability Gala!

More to that, the pair donated $100,000 to Hawaii island of Kauai to replace a playground in 2007. To raise public awareness, Keely also directed a movie titled Poisoning Paradise, which showed the harmful toxic agricultural environment of Kauai.