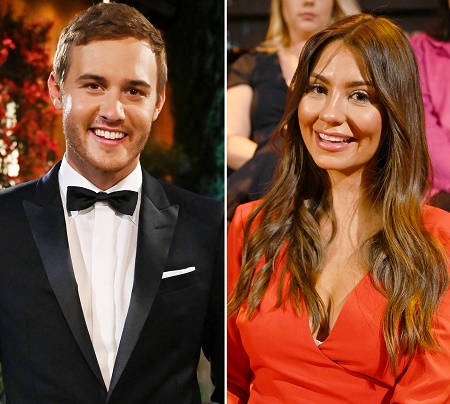 The 38-year-old Peter Weber and Kelley Flanagan have finally become a twosome in the midst of Coronavirus Pandemic. Their romance was first confirmed on April 28, 2020, by Us Weekly where multiples explicitly tell the US they are indeed a couple.

According to an Us Weekly insider,  “Peter and Kelley are fully in to one another dating, but they aren’t admitting it to people," that the pair is aware that they come under fire. The sources further said they declined to share the news with their friends and relatives. But there is no doubt that they are a set.

The reality stars want to keep their romance private after they got a lot of criticism on March 25, when they were first spotted canoodling in Chicago Riverwalk. The two have been so much more alert.

Since then they have been living together in Kelley's Chicago apartment since last month in the midst of the raging (COVID-19) pandemic according to reports.

In addition, the Bachelor’s alum clearly appreciates one another as they have shared in various interviews. The former Bachelor and practicing lawyer's relationship went confirmed when Once Weber told In an interview with Nick Viall:

Are we dating? No. Do I love spending time with her? Absolutely. We're not dating. Could I see that in the future? Yeah, of course. I'd be extremely lucky and very happy if that happened."

Peter, son of Peter and Barbara Weber also revealed that he crushed on Flanagan during a talk on Kaitlyn Bristowe's "Off the Vine" podcast. Further People claimed that Peter told Bachelor Happy Hour podcast on Rachel Lindsay and Becca Kufrin that they are together in quarantine.

He said with a laugh. “She’s got three bedrooms … we each have our own room. And we’ve got Sophie here too, Dustin’s dog, so we’re having a party. It’s a good time.” However, the two who briefly met in September 2019 haven’t confirmed the news themselves.

He said in laughter that Kelley has three bedrooms and they each have a separate room. He stated: 'And we’ve got Sophie here too, Dustin’s dog, so we’re having a party. It’s a good time". Dustin Kendrick is a franchise alum  Hannah Brown The Bachelorette's season.

But the two who met briefly in September 2019 have not confirmed their affair news themselves.

For Access to All our Exclusive Celebrity News Then Visit Marriedceleb