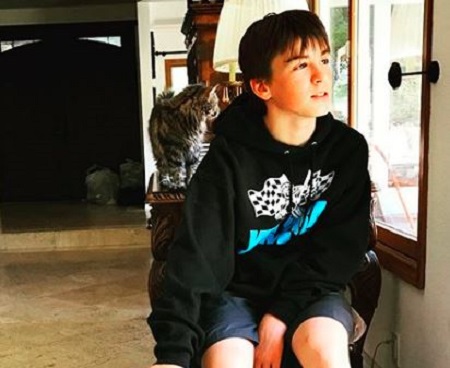 Kelley James Donoho is an American celebrity kid who is best known as the third-born or youngest child of an actress, Holly Marie Combs and her second husband, David W. Donoho, an actor. His mother, Holly made her first breakthrough at the age of 18 with the CBS television series Picket Fences as Kimberly Brock in 1992.

Donoho was born on born May 26, 2009, in the United States. Further, he has two older brothers, Finley Arthur Donoho, born on April 26th 2004 and Riley Edward Donoho, born on born October 26, 2006. His maternal grandparents are Lauralei Combs, an actress, and David Combs. So far, he holds American citizenship and belongs to the white ethnicity.

At the meantime, James Donoho, 11, is yet to young to start a romantic relationship with anyone. So he is now enjoying his childhood along with his parents and siblings. Also, he is focusing on his school days.

On the other hand, his dad, David W. aged 54 and mom, Holly, aged, 46 are no more together. They first met on the set of the WB supernatural drama Charmed in 1998. He was was a key grip on the show. After dating for a few time, the lovebirds exchanged the wedding vows February 14, 2004, at San Ysidro Ranch in Santa Barbara.

From their union, they welcomed three sons together. But Pretty Little Liars's star filed a divorce petition from Donoho after seven years of wedlock. The Charmed actress cited irreconcilable differences as the main reason for their division. She stated that their relationship has been rocky for "quite a while."

Yes, Marie Combs, the momma of three, is officially off the market again. She tied the knot for the third time with her long term boyfriend Mike Ryan. He is a restaurateur.

They exchanged the wedding vows on Saturday, September 7, 2019, in Carmel, California. The intimate outdoor ceremony was held in front of close friends and family members. Holly's three sons, Finley, Kelley, and Riley from an ex-spouse, David also attended the wedding function.

Two years before, Combs and Mike announced their engagement on September 3, 2017, following their one year of love romance. At that time, the actress said: "Yes. Just yes," on her IG wall by flaunting her massive diamond ring.

Likewise, they first met at Ryan's Los Angeles restaurant, Xoc. in 2016 and since then they have been enjoying their relationship happily. As we all know, it was the third marriage for Marie. She was once married to Bryan Smith from 1993 to 1997 and David from 2004 to 2011.

How Wealthy is Kelley James Donoho?

The professional life of Kelley hasn't been started as he is in his early days. So he has no source of income at the moment. But his mother, Holly Marie shares an impressive net worth of $14 million as of 2020. She has made her fortune from acting and producing gigs.

As an actress and producer, Combs further earned $60,000 per episode of the TV series Charmed, which ran for eight years. Similarly, Elizabella Dylan Bugliari's mother or Alyssa Milano who also starred in Charmed has worth $15 Million. Some of her film credits include A Perfect Stranger, Ocean's Eleven, and Born on the Fourth of July.

On the other hand, his father, David W. maintains the estimated net value of $2 Million as of now. Moreover, he makes a good profit from the television series and movies he performed on.