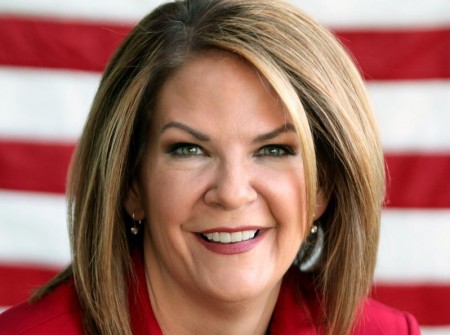 American political analyst, Kelli Ward is well-recognized as the chairperson of the Arizona Republican Party. She is also an experienced physician who received a Doctor of Osteopathic Medicine Award from the West Virginia School of Osteopathic Medicine. Further, in 2018, she participated in the Republican primary election for U.S. Senate campaign but later, defeated by current junior U.S. senator, Martha McSally.

Ward was born as Kelli Kaznoski on 25th January 1969, in Fairmont, West Virginia. She, moreover, holds American citizenship and belongs to white ethnicity/race. Other than that, she is a married woman.

American politician, Kelli is already committed to an American army officer, Michael Ward. Regarding Kelli's spouse, Michael, he served as an air force militant in the Arizona Air National Guard for several years.

The two married in a small and private ceremony where they invited their close friends and family relatives.

The couple further had their first encounter while studying osteopathic medicine at the West Virginia School of Osteopathic Medicine in 1992. Shortly they began dating and later got engaged upon their graduation.

Kelli and her spouse, Michael are the proud parents of two, a son, and a daughter. The name of their first kid is Katie Ward, and the second is Cameron Ward.

Their daughter, Katie attended Arizona State University. Regarding her personal life, she is currently in a relationship with Matt Grim from Phoenix, Arizona. When it comes to their second child, Cameron, he was born on 12th February 1998.

Kelli's spouse, Michael was accused of spitting in the face of Scott Johnston, who volunteered at the Arizona Republican Party's general election on 6th November 2018. The incident was held at the Paradise Valley Doubletree Resort.

After Johnston filed against Michael, the Paradise Valley police didn't take any charges because Scott was the only victim in the allegation. Scott also revealed that Michael threatened him if he goes to the police after the assault. In response, the former Arizona State Senate sent an email to police in November 2018, in which he wrote,

"We have known Scott for several years. We have also known Scott to be a storyteller and attention-seeker. Mr. Johnston came to the area where my wife and I were standing, and I told him to 'F off' and to leave my wife alone. I may have told him to go to hell. At no time did I touch him, push him, threaten him, spit on him, or anything else to him."

Shortly after the incident, Michael arrived in the court, where Scott was also presented for the court's decision. At that time, Michael said to a person named McCain Millennial behind him to step back from taking video.

Take a look at Michael Ward, How he insults McCain Millennial

The video, however, leaked and even shown in Kelli's election campaign, which led Ward's family into trouble. It also caused Kelli in the defeat against Martha McSally in the general election. Nevertheless, the court found Michael guilty for his behavior against Johnston.

The 50-year-old political analyst, Ward maintains a total fortune of $18 Million as of 2019. Back in 2014, she maintained a net value of $15.2 Million and listed 24th as the wealthiest member of Congress. Her current fortune is more than that of Karen Tumulty.

Actively Serving As A Politician

Kelly Ward started her career as senator of Arizona State in legislative district 05 in January 2013. She later left the position and participated in the Candidate for the U.S. Senate, where she represents the values of new ideas and strong backbones for the country on the right track. Since October 2016, she is working as the candidate for U.S. Senate.

If You're Fond of Reading, Then Visit Married Celeb!!!, Where You Can Find Your Favorite Biographies & Articles.