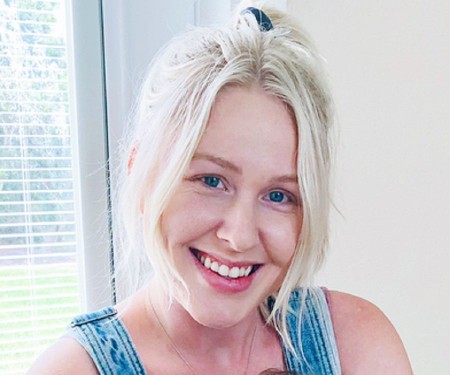 Who is Keren Swanson?

Over the few years many young and talented people have amassed good fame and fortune through social media. And today we will talk about a YouTuber who perfectly balances her vlogging and personal life. The 26-year-old Keren Swanson is a famous YouTuber who runs a channel named "KKandbabyJ" along with her spouse, Khoa Nguyen. Further, she is also a mother to three lovely children.

Keren Swanson was born on November 18, 1992, in Griffin, Georgia, the United States. As of 2019, Keren's age is 26 years and her birth sign is Scorpio. She was born to parents John Alfred Swanson (father) and Catherine Swanson (mother). Further, Keren is the youngest of three daughters and has two older sisters named Catherine and Mary.

When Keren was three years old her parents divorced. She attended Dr. Phillips High School in Orlando. During that time, she met her future husband, Khoa. Further, she studied Public Relations/Advertising at the University of Central Florida.

Keren and her spouse, Khoa both are YouTubers. The couple runs a channel named, 'KKandbabyJ'  which has over 1.1 million subscribers as of August 2, 2019. Likewise, Keren has a self-titled channel  which has over 457k subscribers.

The couple post their daily lifestyle vlogs and family videos. Apart from YouTube, they are equally famous on other social media as well. Well, Keren has over 511k Instagram followers and 173.5k Twitter followers.

As mentioned Keren Swanson and Khoa Nguyen are married. They just recently married in 2019. She first met Khoa during her high school. Keren once said that while seeing Khoa for the first time, she instantly liked him. The couple immediately liked each other an began dating.

Their initial dating phase was on-off relationships for several years. After graduating from high school, Nguyen and Swanson moved in together and for the first time, Swan became pregnant. They had not planned for the child and sadly she suffered a miscarriage some weeks later. The tragic event broke the couple. However, with proper planning they welcomed their oldest son, Jackson on September 26, 2015.

Their second child Landon was born on January 31, 2017, followed by a third son named Sutton on August 16, 2018. Khoa and Keren have been together for over a decade. Talking about their engagement, Khoa proposed her in December 2017. But do you know he previously proposed her with a ring he had bought from Craigslist.com?

Keren married her college sweetheart, Khoa in June 16, 2019 in an incredible wedding ceremony at The Ritz-Carlton Orlando, Grande Lakes. The wedding ceremony was attended by their families, friends, and relatives. For their honeymoon, the newlyweds went to Maldives.

On June 23, 2019, they posted their wedding video which is very sweet. The bride looked stunning in a white wedding dress, while, the groom looked very sharp.

Now the couple is married they are planning to expand their career. Khoa and Keren revealed that their next venture will be real estate. Also, they have launched their joint podcast show together called ‘BAYTS’, or ‘Be A YouTuber They Said’.

Keren Swanson Net Worth and Income

Keren Swanson has maintained good name and fame through her hard work and dedication. The main source of her income is from YouTube. As of 2019, Keren has an estimated net worth of $500,000. For your information some of the YouTubers who earn similarly are  Aja Dang, Zane Rima, Candy Godiva, etc among others.

As per socialblade, Keren Swanson's earnings from YouTube is around s $2.4K - $38.1K per month and $28.5K - $456.7K per year. She along with her husband Khoa post daily lifestyle vlogs and family videos.

As of August 3, 2019, the couple's channel, 'KKandbabyJ' has 1,156,919 subscribers and 397,866,005 views. Therefore, the channel's progression must landed them a hefty sum of income. The couple has a beautiful home in Orlando, Florida. They also ride a stunning Audi for their ride.

An interesting fact is that before they launched their YouTube career, they lived in Khoa's mom's house. They were literally broke and both used to work at Khoa's mom' restaurant to earn more money. But look where they got today.

Keren Swanson stands at the height of 1.7 m (5 feet 7 inch) and weighs around 58 kgs ( 127.8 lbs). The beautiful Swanson has light blue eyes and blonde hair. Her Instagram account has 511k followers and has 173.5k Twitter followers.