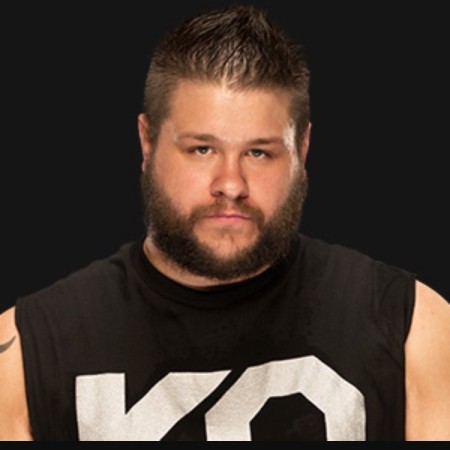 Kevin Owens's real name goes as Kevin Steen. He started his wrestling career in 2000. He made his debut at the age of sixteen. Before joining WWE in 2014, He worked along with several other wrestling organizations.

Kevin Owens is a happily married man. Owens is married to his longtime girlfriend, Karina. The duo walked down the wedding aisle in 2007. At the time of their wedding, Both of them were not much popular so, much information about thier wedding is not known to the public.

As per sources, Kevin and Karina had a private wedding ceremony where they had invited only a few number of friends and some members from both the families.

Soon after their wedding, The love birds welcomed their first child a son, Owen Steen in late 2007. Kevin seems to be very much supportive of his children. He keeps taking his son to his matches.

The family of three was blessed with a daughter, Elodie Leila in April 2014. As Kevin remains out of the house most of the time for his work, Karina remains at home looking after their children.

The love birds have been married for more than fourteen years. There has been no rumors of the couple separating anytime soon.

Kevin made his debut on his sixteenth birthday. He trained for three years and made his professional debut in International Wrestling syndicate in 2003. The wrestler won his first title as IWS World Heavyweight Championship in 2004.

The WWE wrestler entered to Combat Zone Wrestling in 2004 and was part of the organization until 2006. He then started fighting for Pro Wrestling Guerilla. Owens worked there for several years and moved to Ring of Honors World Champion.

After spending some years with ROH, The wrestler returned to PWG. On August 12, 2014, WWE announced that Steen had signed with them. He worked with NXT initially and then made his WWE debut in 2015.

Kevin Owens has an estimated net worth of more than $10 Million. he has accumulated most of his net worth to his successful career of working as a professional wrestler. Bayley Wrestler is a well-known professional female wrestler with a net worth of $1 Million.

In 2018, Kevin Owens earned more than $2 Million which earned him first-ever appearance on the Forbes list of top-earning WWE stars. He is very much early in his career. He shall be earnings a hefty sum in the days to come.

Kevin is a active social media user. He is a active user on Twitter. The wrestler has gathered a fan following of more than 1.2 million followers in his Twitter account.

Kevin Owens was born as Kevin Steen in May 7, 1984, in Quebec, Canada. He seems to be the only child born to Terry Steen and his wife, Suzzane Steen. Nothing much about his parents profession is shared with the media.