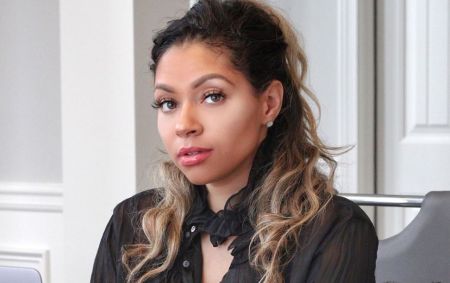 Former American stripper, Kia Proctor is well known for her glamour style, talent, and ability to confront in any multiple project ventures. She is also the long-time partner of Cam Newton, who's currently playing as the football quarterback for the Carolina Panthers.

Proctor was born in 1988 in Maryland, United States, and holds American citizenship. She belongs to the African-American ethnic background/race. Find more interesting facts about Proctor's personal life below.

Kia Proctor and her long-time boyfriend, Cam Newton isn't committed as of now. Nevertheless, the couple is delighted to be in a relationship for more than six and a half years.

The couple had their first meeting in 2013, and shortly they began dating. The couple later spotted at the 139th running of the Kentucky Derby on 4th May 2013. During that time, Proctor didn't want to come into the limelight as a girlfriend of Newton, but she later proclaimed that she and Cam are in an intimate relationship.

The 32-year-old businesswoman, Proctor, and her boyfriend, Newton are now the parents of four lovely kids. Kia first gave birth to a son, Chosen Sebastian Newton on 24th December 2015 and Newton wrote a tweet about his newly born child on Twitter on 30th December 2015, where he stated;

"My longtime girlfriend and I were extremely blessed to have a son last week. Our family is excited and thank you all for the well wishes!"

Two years later, Proctor and Newton welcomed a daughter, Sovereign-Dior Cambella Newton on February 2017. Following the birth of their second child, Kia gave birth to a baby boy, Camidas Swain Newton in July 2018. More to that, the family of five turned into six after Proctor gave birth to their 4th child, Cashmere Saint Newton in October 2019.

On the other hand, Kia has an older daughter, Shakira Proctor, whom she welcomed from her previous relationship. Likewise, Newton also adores Shakira and wished her a happy birthday back in 2015 via Instagram, where he wrote a unique caption saying,

"Happy Birthday to the real girl who changed my life ever since we first met five years ago. You have challenged me in ways you will never know because in retrospect, you were my first child. This message isn't to brag or to even complain about my situation, but this is just real talk. Being labeled a stepdad is hard on the parent just as much as it is for the child to accept it. It is hard work for both parties and I respect any stepparent that takes full responsibility of a God sent child. I remember the first day you called me daddy and I was scared as hell. But when I thought about it, I was honored for you to think of me as not only a male figure in your life but also as a father figure you could learn from as well. Your mom and I are not married, but no one can tell you that I'm not your father and they damn sure can't tell me that you're not my daughter. I love you, or better yet, Daddy loves you Kirry. Happy Birthday Shakira aka Kirry aka B1 Gsissy (as ChoCho calls her)."

Proctor also posted a picture on the next day of last year's Christmas Eve while spending quality time with her children on 26th December 2019 on Instagram. The Newton-Proctor family are really to keep a beautiful bond.

Cam Cheating on her with Queen Shaw

Once, the rumor of Kia's partner cheating on her spread like wildfire. Even many sources claimed that they separated because of her partner's affair with La Reina Shaw, a model.

As soon as this rumor ended, another arose of Reina Shaw being pregnant with Cam's child. However, nothing has yet been confirmed.

Former American stripper, Proctor's net worth is $350 Thousand as of 2020, which is more than Tammy Jessop's total fortune. She is currently earning a decent salary from her profession. So, her yearly income might be in the same range of an American businesswoman, which is $65,409.

Listed a Lavish Accommodation on Sale

Kia Proctor and her partner, Newton sold his Charlotte, New Carolina rooftop on sale for $3.2 Million, which he bought at $1.6 Million. Their former condo is based on 3,267 square feet, which consists of 3 bedrooms, 3 full and 1 half bathrooms.

After selling their New Carolina-based residence, the two now reside in a newly furnished apartment at 110 Centennial Olympic Park Drive in Atlanta, Georgia, based on 4,600 square feet. Kia and Cam are currently running a cigar bar-restaurant, Fellaship near Mercedes-Benz Stadium in Atlanta. Similarly, Lee Najjar and his wife, Kimberly Najjar also live in a $13.8 Million habitation in Atlanta.

If You're Familiar With Exploring Celebrities' Relationships & Love Affairs, Then Visit Married Celeb!!!