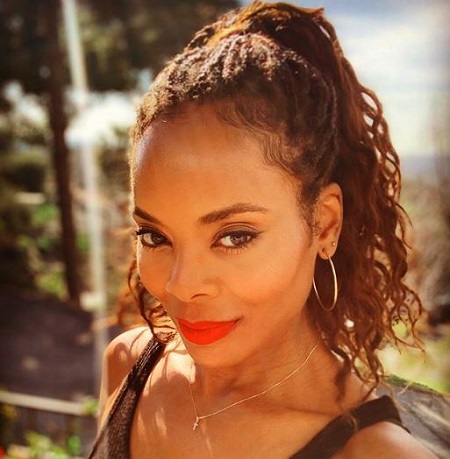 Are you familiar with American Actress Skai Jackson who came to fame after portraying as Zuri Ross in Disney's TV series Jessie? Then you must be close to her mother, Kiya Cole, who serves as Skai's part-time manager.

She was born on March 12, 1975, in New York City, United States. She holds American citizenship and is of African American ethnicity. However, the information regarding her family background is not known. Moreover, she has one older brother named Pharaoh.

Yes, you have read that correctly. Forty-five years old Cole was previously married to her husband whose name is Jacob Jackson. But their exact date of the wedding remains private or within themselves.

The couple has welcomed three children, two daughters and one son from their marriage. Their firstborn child is Skai born who was born on April 8, 2002. While remaining of two kids' name is not known. After giving birth to their three babies together, the couple had divorced, due to various their personal differences.

Since her divorce, Kiya has raised her children in New York City as a single, loving mother. The mother and her daughter Skai also share a very close relationship, as they see each other as their best friend. In addition, they can often be seen together on their social media pages, as well as at red carpets events.

Kiya's actress daughter Skai, who is 18, is no longer a kid as we all know. But she remains incredibly protective when she feels her daughter is under threat. Now, Cole became engaged to her fiance, Gene Salas in 2016. But she has not shared any details regarding her love relationship with the media.

Today, Kiya's actual profession is yet to be disclosed. But she previously resigned from her job to concentrate her daughter's acting career who started acting at the age of seven. Now, Cole serves as her daughter's part-time manager.

On the other hand, her daughter, Skai Jackson has an estimated net worth of $500 thousand as of early 2020. She credits all of her fortunes to her acting work by appearing in various TV series and films. She additionally makes extra amount from her YouTube channel where she uploads original content.

In 2011, Jackson starred in 3D live-action/computer-animated comedy film The Smurfs, where she played the character of Kicking Girl. And the film became a box office success making $564 million worldwide against the budget of $110 million budget.

Her next portrayed film G.I. Joe: Retaliation has made $378 million worldwide against a budget of $130–155 million in 2013. In the film, she worked alongside Channing Tatum, Bruce Willis, and Dwayne Johnson.

Well, Skai has been active in the entertainment industry since 2007. She initially started working as a child model by featuring in several national commercials such as Band-Aid bandages, Coca-Cola, Pepsi, and Old Navy.

She made her first acting debut with the independent film Liberty Kid in 2007. Then she acted in several films such as The Rebound, Arthur, The Smurfs, and G.I. Joe: Retaliation.

However, Jackson made her breakthrough character Zuri Ross in Disney Channel's comedy TV series, Jessie. The series ran from September 30, 2011, to October 16, 2015. The cast members of the show include Debby Ryan, Peyton List, Cameron Boyce, Karan Brar, and Kevin Chamberlin.

She further has performed in a number of other shows like Dora the Explorer, Austin & Ally, and Boardwalk Empire. She again reprised her main role Zuri Ross in the show's spinoff Bunk'd in season 1 to 13 from 2015 to 2018.

Asides acting work, she released her first book Reach for the Skai: How to Inspire, Empower, and Clapback in 2019.