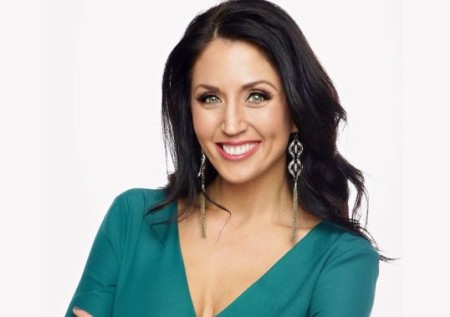 Kristen Crowley has perfectly mastered the art of balancing her personal and professional life. She is a wellness coach, event host, and a businesswoman. However, Crowley is best known as the former local morning traffic reporter/noon anchor at WTKR TV. She worked 12 years as a reporter before becoming a fitness expert.

Kristen was born on June 15, 1979, in the United States. She is 41 years old as of 2020. Crowley has vast experience and has enjoyed her career in merchandising, food, television, and wellness.

Kristen grew up on a horse farm in Michigan. She was born to parents, Christine and Patric Crowley. Her mother is a floral designer while her father is a business consultant. Also, Kristen's grandfather was a WWI veteran.

Crowley attended South Lyon High School and studied Visual Merchandising at OTC Southwest Campus. She has an older sister named Jennifer, who is a physician. Further, she also has step-brothers, but their identity is a secret.

The beautiful fitness enthusiast, Kristen Crowley, is married to a handsome man named Mark. Her husband is a veteran who served 23 years in the Navy. At present, he is a business owner. The couple tied their wedding knot in September 2007. Likewise, they have been married for nearly 13 years as of 2020. Anna Kaiser, a renowned fitness instructor, also has a happy married life.

On the occasion of their 12th anniversary, Crowley shared a picture on her social media on September 30, 2019. Kristen and her spouse, Mark, share two children. Their eldest child, a daughter named, Veronica was born in May 2008. Likewise, their second child, a son named, Talon was born in May 2013.

Kristen revealed on her website that she went through post-pregnancy depression. Both of her pregnancies were of very high risk. At present, in her early 40s, Crowley looks fit as ever.

Further, Crowley has a very busy schedule as she once stated that her morning routine starts around 3:30 a.m. She left her traffic reporter position to give more time to her family. During their free time, Kristen, along with her husband, visits exotic places for vacations. Her favorite places for vacation are either Hawaii or NYC.

The former television host, Kristen, has a net worth of $500,000, which is similar to another fitness coach, Melissa Wood. She is the owner of a company called KC Media, where she serves as the media coach, event host, and blogger. She has a background in fashion merchandising as well.

Crowley is also a brand ambassador and influencer for fitness and food products. She has a brand called WELLFITsocial, which is the first wellness networking event in Virginia. Kristen, along with another fitness enthusiast, Jill Bunny, co-founded a brand called reframeyourbiz.

Besides. she has done voice-over for CBS, Coast Live, STRONG Fitness Magazine, Multiple Bridal shows, etc. Kristen has appeared on several television shows. On average, she might earn over $47,000 per year.

The more Kristen works for her family, and she is equally concerned about giving back to the community. She is actively involved with several charities.

From Television to Wellness Industry

Crowley has a diverse background with an extremely hard work ethic. She has over 15 years of working experience as a media professional. Kristen lived in Hampton Roads for 15 years. She moved to Hampton Roads as she was transferred as the Visual Merchandising Manager for Lord & Taylor. Afterward, she continued to work in the restaurant and slowly made a transition to television.

She left her television career to start her own fitness brand and to spend more time with her family. As of now, Kristen is happy with her career.