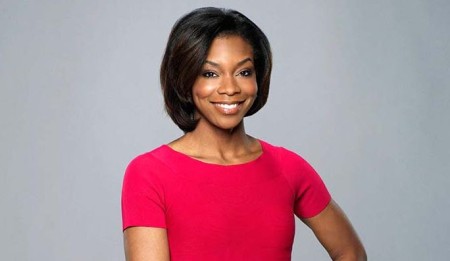 Kristina Pink is one of the recognizable faces of the Fox Sports family. She currently works as a reporter for FOX Sports' NFL coverage and a sideline reporter for the Los Angeles Clippers basketball broadcasts.

Pink began her professional career as a sports anchor/reporter at WDBD-TV in Jackson, Mississipi in 2008. She covered the 2010 Super Bowl XLIV and the 2010 Pro Bowl in Miami. Let's know some lesser-known facts about this gorgeous sports anchor.

The 34-year-old sports reporter is a single woman as of now. Yes, Kristina doesn't have a boyfriend, and she isn't married as well. She has a lot of admirers who appreciate her beauty and her curvy figure. However, Kristina hasn't found a man who has stolen her heart.

Despite being in the media, Pink hasn't shared anything about her personal life. The detailed information regarding her past romantic affairs is unavailable. At present, Pink has an excellent career, so it seems her busy schedule probably leaves no room for a serious relationship.

Pink has never said about her future wedding plans, nor she has revealed about having a child. When she isn't working, the Fox reporter spends as much time with her family, especially her father and brother. Additionally, Kristina enjoys with her colleagues at vacations, parties, and events.

The longtime sports journalist, Kristina Pink, has an estimated net worth of $800,000 as of 2020. As a Fox News sports reporter, she earns an annual salary of over $64,895, which is less than her colleagues, Joe Buck and Erin Andrews.

Pink has worked for other television networks such as NBC and ABC. She has been working as a NFL reporter for Fox Sports since 2012 and is one of the trusted and well-informed reporters. On average, Fox Sports reporters makes an annual salary of over $65,000.

Over her 12 years of professional journey, Kristina has amassed a decent net worth. Additionally, her earnings will increase even more in the coming future. Besides, Pink also hosts sports events which definitely adds a certain amount in her bank balance.

Kristina Pink was born on March 12, 1986, in Miami, Florida, the United States. She hasn't revealed much about her family background, but her parents have appeared on her social media. Further, Pink has a younger brother as well.

Talking about her education, Kristina attended high school in Pembroke Pines, Florida. Further, she graduated with a Bachelor's degree in telecommunications from the University of Florida in 2007. While on campus, she provided Florida athletics feature stories.

As a Sports Reporter

Pink wanted to become a sports reporter since her undergraduate years. In an interview, she said: “For me, sports – covering the NFL, covering the NBA, even when I worked in local TV in small-town local TV – for me, it’s fun."

Besides covering the Super Bowl and Pro Bowl in 2010. Likewise, during the playoffs in 2018-2019 season, Kristina served as the AFC reporter for Fox Sports. She can be seen covering Thursday Nights Football.