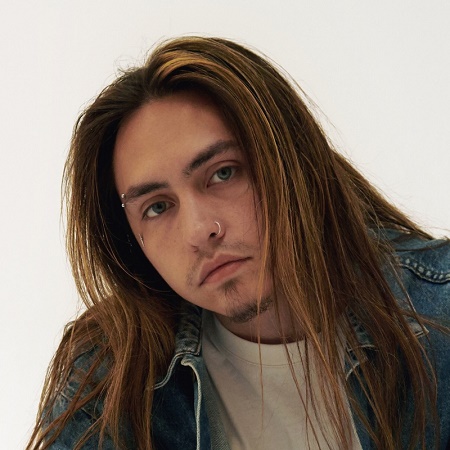 Landon Cube is well recognized inside the music industry as a rapper, singer, songwriter, and producer. However, he gained huge fame after his collaboration with rapper Lil Skies, on two singles Red Roses, and Nowadays. Now, he's posting his music on SoundCloud and on YouTube Channel continuously.

He was born on February 1, 1998, in Maryland, United States. Likewise, his father is also a musician and piano player who taught him to play various musical instruments. In October 2013, Landon featured his dad playing piano on Instagram. He holds American citizenship and is of White Caucasian ethnicity.

Is he married or is still Single?

The 22 years old hip-pop artist is an unmarried man. But as of now, he is enjoying his love life with a girl named Liltiny. She is a tattoo artist but nothing much is known about her on the media.

The romantic couple has been dating each other for the last year of August 2019. Now, going through their Instagram page, the two never hesitate to share their intimacy or hanging out pictures on their respective media platforms.

Nevertheless, Cube posted the first photo on November 10, 2019, with his girlfriend while taking a selfie at a beach.  He recently shared a picture of them on Valentine's Day special of early 2020 with the caption: "My Valentine". In contrast, Liltiny wished Landon on his 22nd birthday by posting the image on her Instagram account.

The Net Worth of Landon Cube

Landon's net worth hasn't been officially confirmed but it somehow falls in around $1 Million. He amassed his total earnings from his professional work as an American singer and music producer. Similarly, another musician, Lil Tecca and Coi Leray holds $500 Thousand worth.

Throughout his music career, Cube has released many hits songs include Drive My Car, 19, Legend, Beachtown, and New World’s Mad. Likewise, his and rapper Lil's tracks Nowadays and Red Roses, both reached at # 85 and # 98 respectively on the Billboard Hot 100 list.

Currently, he has 170k subscribers on his YouTube channel which was launched in 2018. His most viewed official videos are Beachtown’ and Drive My Car. According to the social blade, he's making the amount $77 - $1.2K per month or $926 - $14.8K per year.  In addition to YouTube, he has numerous or countless followers on Instagram and Twitter.

Landon initially started his music career by posting music videos like the American Dream, Victims, and Euphoria on YouTube in 2013 at the age of 15. By 2016, he began uploading his songs via SoundCloud and also uploading Frank Ocean, Major Lazer, and Justin Bieber's guitar covers such as Cold Water, Self Control, etc.

That same year, Cube released a first single 18. Then in 2017, he started to integrate more hip-hop beats and rap through his songs like Beachtown, Legend, New World 's Mad, Drive My Car, in 2017. He was then featured on the tracks Nowadays and "Red Roses from Lil's Top Ten R&B / hip-hop album Life of a Dark Rose which achieved massive popularity, amassing millions of views on YouTube.

Do visit marriedceleb for more updates.