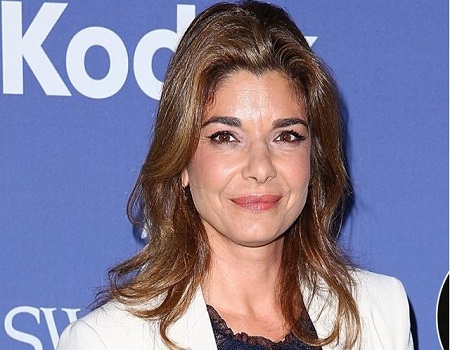 Who is Laura San Giacomo?

Have you ever viewed 1989's American independent drama film Sex, Lies, and Videotape? If yes you could familiar with the name Laura San Giacomo who portrayed the role of Cynthia Patrice Bishop. Well, she is an American actress who is currently starring in TNT drama series Animal Kingdom from 2017 and as well as the CBS action police procedural series NCIS since 2016.

Laura San Giacomo was born on 14th November 1962 in West Orange, New Jersey. Further, she was raised and born by her parents MaryJo (mother) and John San Giacomo (father), a paper mill owner. She holds American citizenship and belongs to Italian American ethnicity. Regarding her education, Giacomo graduated from Morris Knolls High School. Later on, she joined Carnegie Mellon School of Drama in Pittsburgh.

After graduation, San started her acting career in the late 80s, appearing in guest-starring roles on such programs as Crime Story, The Equalizer, Miami Vice and  Spenser for Hire. However, she gained people's recogintion after performing in  1989 film, Sex, Lies, and Videotape. Her notable films are Pretty Woman, Quigley Down Under, Suicide Kings, Havoc and Least Among Saints.

Moreover, Giacomo has starred in many TV shows including The Stand, Fallen Angels, Just Shoot Me, Grey's Anatomy, NCIS, Animal Kingdom and among others.

Well, Laura San Giacomo has been married twice and one-time divorce as well. She firstly tied the wedding knot in 1990 to her first husband Cameron Dye who is an actor. The former duo also welcomed their child Mason Alan Dye in November of 1995.

However, Laura and Cameron divorced five years later for an undefined reason in 1995 and eventually moved down separate paths. Well, her son Alan has cerebral palsy.

After the divorce from Cameron, San walked down the wedding aisle to the actor as well as her second husband Matt Adler in 2000.This beautiful lady with a height of 5 feet 2 inches currently resides in the San Fernando Valley, California along with her husband.

In addition, the couple also attended the 15th Annual Gala of Shane's Inspiration at The Globe Theater. Also, Laura and her partner Matt is enjoying their marital relationship for 19 years with no sign of divorce and extramarital affairs.

Besides all this, the duo is yet to welcome their offspring. Seems, they seems to be workaholics because they might be busy with their careers instead of concentrating on building up their own family.

What Is Laura San Giacomo's Net Worth? Income, Salary

One of the prolific actress,  Laura San Giacomo has earned a substantial amount of money throughout her professional acting career. As of 2019, San Giacomo has a net worth of $6 Million which is more than of actress Odette Annable. Well, she is active in the media industry since 1987 as she appeared in numerous movies and television series.

San Giacomo's actual amount of salary isn't revealed yet. Moreover, the American television actors make $150 thousand - $1 million per episode, so she also makes somewhere in the above ranges. One of her movies, Pretty Woman earned $463.4 million in the box office with a budget of $14 million.

Besides acting, San Giacomo is highly active in collaboration with many charities which help children with disabilities. Further, her son Mason Dye was diagnosed with cerebral palsy after birth.

In 2001, Laura established the CHIME Charter Elementary School for all children of all abilities in Woodland Hills, California.

Do visit marriedceleb for more detail.