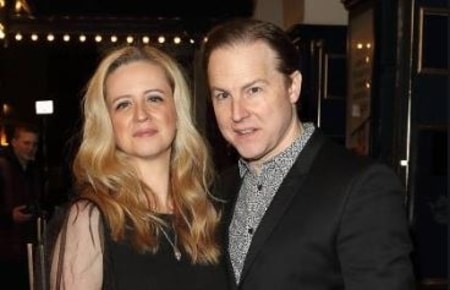 Critics' Circle Theatre Award for Most Promising Playwright winner, Laura Wade is an English Playwright. She has published numerous plays in her career. Recently her play Home, I'm Darling was premiered at Theatr Clywd.

Sheffield native Laura is happily living with her partner Samuel West. Though the pair haven't exchanged their wedding vows till today. Their relationship has been marked as of the highlighted ones.

So let's look upon their personal life.

The beautiful couple, Laura and West found one another back in 2006. Due to a common interest and same working background, they were easily attracted by one another and later started dating.

In 2007, the pair moved in together and started a living relationship. However, it didn't go as well as planned. Within three years of living together, the pair got surprisingly separated.

Which led their fan to wonder whether they will patch up or not? Later, in 2013 the duo again followed the same path.

Laura and her Partner are blessed with Two Daughters

In 2014, the couple openly announced to the world that they are parents. Their first daughter brought the newly patched couple a lot of happiness, Which also makes their relationship stronger.

Laura even stated, " Our daughter has made us realized how important it is to be together". Soon the family of three expand into four after the blessed are blessed with another daughter.

On August 19 Laura gave birth to another gorgeous daughter. Samuel even posts a photo of him and daughter proudly in his official Twitter account. Stating "Oh, and our second daughter was born".

As of now the family of four lives together in their home. Despite a busy schedule the pair seems to take good care of their children in every possible manner.

Why are they still Un-Married?

The two powerhouses of the Hollywood industry are together for more than one decades. Actually, they are bounded for over twelve years and also share two beautiful daughters.

However, the most strange thing is the cute couple are yet to exchange their wedding vows, unlike Gillian Flynn. It has led the fans to wonder whether or not the unmarried couple will ever marry one another. Neither the party has spoken about their wedding plans and future plans yet.

Stay connected to married celeb for more gossips and biographies!!!