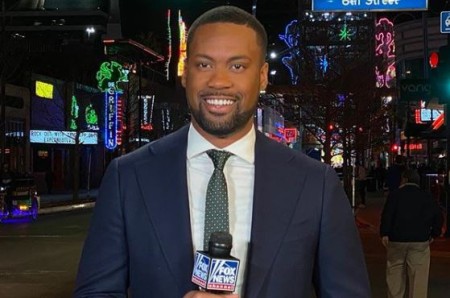 Facts of Lawrence B Jones

Body and Relation Status of Lawrence B Jones

Lawrence B. Jones is an American talk radio host and author who is working as a fill-in host and political analyst at Fox News Channel. Previously, he worked as editor-in-chief at Campus Reform. Similarly, he has been the television, radio, and podcast host for The Blaze.

Lawrence B. Jones III was born on December 10, 1992, in Texas, the United States. He is 27 years old as of 2020. Jones was born to parents, Tameria (mother), and Lawrence Jones II (father). In 2011, he graduated from Garland High School. Likewise, he received a Bachelor of Science degree in Criminal Justice from the University of North Texas.

Is Lawrence a married man?

This talented conservative political commentator is not married yet. Lawrence is possibly living a single life as he is not involved in any romantic affairs. Till now, he hasn't shared if he had girlfriends in the past or not. Also, the 6 feet tall television host seems to be focused on his career.

In his late 20s, Jones might have been in a few relationships before. Despite being active on social media, he doesn't share a single piece of information about his love life. Also, he isn't bothered to be a single man. In the future, Lawrence might find a suitable partner. Like Jones, Peter Doocy prefers to keep his personal life under the limelight.

The Fox News contributor Lawrence B. Jones has a net worth of $1 million as of 2020. He has been active in the journalism industry for over five years. On average, the Fox News contributor salaries range from a low of $31,330 upto $141,000. However, there are some exceptions, as some experienced journalists earn around $569,000 a year.

In the past, Jones worked as a television, radio, and podcast host at The Blaze, where he received over $46,000 a year. Also, he had a show called The Lawrence Jones show. Unlike him, another popular contributor, Lisa Marie Boothe, has a huge net worth of $10 million.

Jones' fame grew even more after he created a fundraiser for Memories Pizza, a Pizza shop in Indiana that refused to cater a gay wedding. After receiving a wide backlash, the shop was closed. Likewise, Lawrence raised $844,000, which was donated to charity and the owner's church.

In his late teens, Jones served two years as a board member for Dallas County Child Welfare. Further, in 2016, he was a member of the Garland Parks and Recreation Board.

The graduate in Criminal Justice, Mr, Jones was recognized by The Washington Examiner's Red Alert Politics annual "30 under 30". Additionally, he was listed in the Newsmax's 30 Most Influential Republicans under 30.

In 2013, Lawrence worked as an investigative journalist, and his work exposed the corruption in the Affordable Care Act marketplace. For his story, Jones received the 2013 FreedomWorks Activist of the Year Award.

Lawrence was once mocked online when he wore a small bulletproof vest during a Fox News segment in April 2019. Several journalists said they have never used protective gear while reporting on the border region.