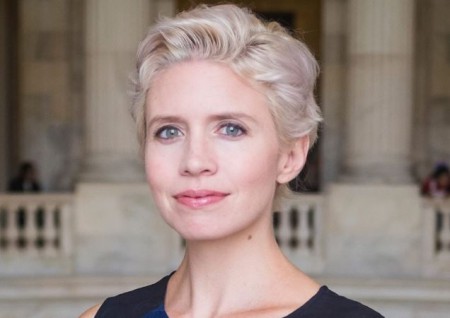 Very few reporters gain fame from their profession. Few journalists like Kristen Dahlgren are very popular as NBC reporter. And today we will talk about a female political reporter who works at NBC news covering events of Capitol Hill. She is none other than Leigh Ann Caldwell.

Leigh Ann Caldwell was born on August 15, 1978, in Las Vegas, Nevada, United States. As of 2019, she is 41 years old, and her birth sign is Leo. Despite being a popular image history, she hasn't revealed her family background and parents.

From an early age, Caldwell had a dream of becoming a journalist. She was a swimmer during her high school and always wanted to be a sports broadcaster.

Leigh attended North Carolina State University after receiving a four-year scholarship for distance swimming. During her school time, she was an accomplished athlete. She majored in Communications and Political Science and graduated in 2000.

From Waiting Tables to Reporting Politics

After graduating, Leigh moved to New York to pursue a career in journalism. She initially worked as a waitress and then began her freelancing journalism career. From 2004-2012, she launched Radio Rootz, an education initiative for youth.

Over the past few years, Caldwell has worked for major stations such as CNN, Radio France International, and CBS.

The 41-year-old NBC news reporter, Leigh Caldwell is a married woman. She is married to her longtime partner, Gregory Jaczko. Well, Caldwell's husband is a former chairman of the U.S. Nuclear Regulatory Commission (NRC).

The couple has been married for over twelve years and is living a blissful married life. To date, they are not involved in any controversies.

Leigh Ann Caldwell and her physicist spouse, Mr. Gregory married on May 5, 2007. Their wedding ceremony was held in a lavish ceremony in front of family and friends. Following their decade long marital solidarity, the couple still looks as fresh as a young couple.

The details about Caldwell and Jaczko's past relationship status is unavailable. Nevertheless, the couple seems to enjoy their bonding.

From their marriage, Caldwell and her spouse, Jaczko has two children, a daughter, and a son. The details about their birth date are unknown. However, looking at their social media, it seems that both their children are under ten years.

As of 2019, the NBC News journalist, Leigh Ann Caldwell has an impressive net worth of $700,000. She has been working in the journalism industry for a very long time. Throughout her career, Caldwell has amassed a stupendous income, and she is still active in her profession.

Before NBC network, Leigh worked for C-SPAN, Radio Rootz, CBS News as well as CNN. She has gained a whole lot of unique experiences working in some highly reputed news network.

Caldwell hasn't revealed her actual salary in front of media. However, as per the sources, she earns an annual salary of over $68,000. Kelly O'Donnell, a leading Capitol Hill Correspondent for NBC News reporter, is among the highest-earning reporter.

During her career, Caldwell has covered some of the most important events. She was the first journalist to interview ex-presidential candidate John Edwards following his cheating scandal.

Similarly, she is one of the first journalists to break the news on the scandalous conduct of US secret service agents in Colombia in 2012.

She has won a prize from the Independent Press Association for covering the rebuilding of New York City after the 9/11 attacks.