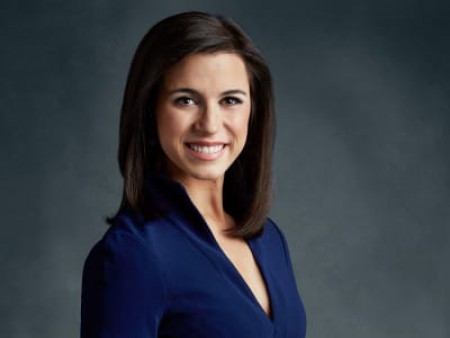 The 34-year-old, Leslie Picker is an economics reporter for CNBC who covers the stories regarding hedge funds, private equity, and asset management. Further, Picker serves at CNBC Global Headquarters, and her reporting appears on television and CNBC's digital platforms.

Previously, she was a reporter at The New York Times, where she covered mergers and acquisitions shareholder activism and initial public offerings. Apart from having a profitable career, Picker also has a joyful married life.

Leslie Picker and her husband, Evan Michael Haedicke, married on November 12, 2016. Their wedding ceremony was officiated at the Four Seasons resort in Scottsdale, Ariz. Before their marriage, the couple were engaged in December 2015.

For your information, the story of their engagement is very romantic. In late 2015, Evan took Leslie to a Pinkberry yogurt store and get her favorite frozen yogurt. Afterward, he recited a poem titled "4 Years and 1 month" which chronicled the relationship between the two. After Leslie had finished reading the poem, Evan get down on one knee and proposed her.

The CNBC reporter and her spouse, Evan has been married for almost three years as of 2019. They first met in 2011 on a blind date arranged by one of their mutual friends in New York. At the time, Picker was a student while Evan was just entering the finance industry.

Expecting A Baby In December 2019

Picker, who is based in New York, is expecting her first baby in December. On September 24, 2019, Leslie shared a sweet picture alongside Evan showing her baby bump with the caption Praguenant. The caption referred the city, Prague where they visited for vacation.

She and her husband, Evan, are currently on the search for a new and larger apartment. It appears that the couple is already planning for their yet to be born baby's future. In an interview with NBC, Picker shared about the couple's savings they started shortly after their marriage.

Know A Little About Picker's Spouse

Evan Haedicke, the 34-year-old, celebrity husband currently works as the consulting manager for a company called Persado located in New York City Area. Previously, he worked as the senior manager at BulbHead.com, the digital division of Telebrands Corp.

Evan has also served as the manager, as well as a senior associate for Alvarez and Marsal Business Consulting.

The CNBC's financial reporter, Mrs. Leslie Picker, has a net worth of $800,000 as of 2019. The primary source of her income is the journalism industry. Leslie specializes in covering hedge funds, private equity and asset management. Reporters such as James Goldston and Jackie DeAngelis also has similar net worth.

Picker has interviewed some of the prominent investors on CNBC. Also, she has won a Society for Advanced Business Editing and Writing (SABEW) award for her investigation into Puerto Rico's debt crisis. Further, Leslie was a finalist for a Gerald Loeb Award in 2018.

Previously, Picker worked as a reporter for The New York Times and Bloomberg News. She began her career as a booker at Fox Business Network and today her annual salary ranges between $92,000-$120,000.