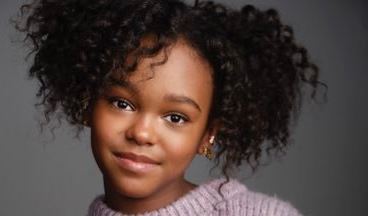 Lidya Jewett is a child actress better known for playing the role of Katherine Johnson's teenage version in the series Hidden Figures as well as Teenage Rubi Young in The Darkest Mind. She also starred in Hollywood blockbuster Black Panther. Meanwhile, Jewett first gained prominence when she debuted in the role of Gracie Walker in Nickelodeon's 'WITS Academy.'

The Child artist, television and movie actress, has contributed her voice in several projects, Jewett was born on January 19, 2007. She holds an American nationality and belongs to Afro-American ethnicity.

Moreover, the young actress, Lidya, stands a decent height of 4 feet 3 inches, and her body weight is around 52 lbs and featured as the cast member for NBC's 'Good Girls' in 2017 along with the actors like Alison Tolman and Reno Wilson. Scroll down to know more.

The 13 years old young actress is single. She is too young to have a boyfriend; therefore, we can assure you that she is leading a single life.

Lydia is a rising star, and it's still a long way for her in the Hollywood industry. So she is engaged in improving her work, and she is determined towards her goal. Scroll down to know her family.

Jewett has won the hearts of millions through her astounding acting skills. People have watched her over the big screen as well as in T.V series. But talking about her earlier days than, things very much worsened in her life.

She was born in Ethiopia, Africa, where she was left in the orphanage by her biological parents. And obviously, in an orphan house, she struggled with hunger and proper basic needs.

However, when she turned four years old, she was adopted by the family who situated near Palm City, Florida. Her adopted father and mother name is Kim Jewett and Dale Jewett.  Scroll down to know her more about her family.

She has led a glamorous life since her adoption to her parents. Her adopted family has done everything for her to give Lydia a beautiful life. She also hasn't ceased her attempt, and she is working on bettering herself with her familial support.

Currently, in her family, she is blessed with three caring siblings, and she has an outstanding relationship and fellowship with them. Moreover, her siblings are Mac, Isabella, and Jewett Connors. The love and devotion between the siblings are lovingly seen in the picture she posted on the day of the National Siblings.

Lidya Jewett has earned a decent amount of fortune and fame so far through her professional career. As of 2020, she has an estimated net worth of around $300,000. Currently, she is the focus of media due to her role in Good Girls, where she must be earning around $30,000 to $40,000 as a salary.

Similarly, she has been the part of Marvel Cinematic Blanck Panter and Hidden figures and The Darkest Mind, where she must have earned thousands of dollars. She is also earning a good amount of wealth through a photoshoot. She also appeared in different Magazines Cover, but so far, she has not disclosed actual income in front of media.

Visit Us: MarriedCeleb for more news and biographies!