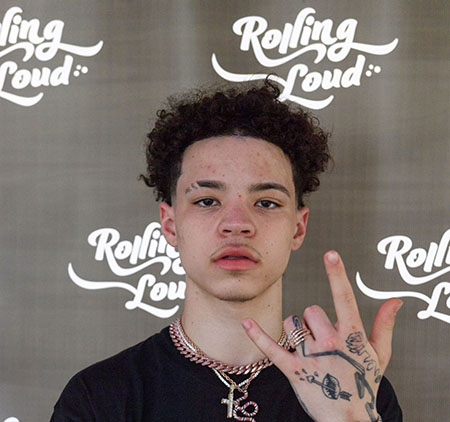 Teen rapper and songwriter Lil Mosey's Blueberry Faygo has surpassed his 2018 debut single Noticed as his most commercially successful song. Blueberry Faygo was released on November 8, 2019, peaked at number 62 on the Billboard Hot 100.

Lathan Moses Echols was born in Mountlake Terrace, Washington on January 25, 2002. Raised by African-American parents, Lil listened to American rapper Meek Mill a great deal when he was young. His favorite song was Dreams and Nightmares by Meek. Eventually, Lil grew up to be a celebrated rapper himself.

Is Lil Mosey In a Relationship?

Eighteen years old Lil Mosey hasn't been rumored of In addition to being protective about a personal matter, Lil hasn't even revealed his parents to his fans. Lil is also popular in social media and his fans are mostly teenagers. He has worked with several fellow artists but the Noticed singer is probably single at the moment.

Lil currently resides with his parents and has achieved success in a short span of his music career. He is still young to fall into romantic relationships and never talks about it publicly. Seems as if Lil is prioritizing music at present. As a school drop out, Lil has proved himself a devoted artist of the music. But like always, his fans want to know more about his love life. American rapper MattyBRaps is also a teen artist like Lil.

What Is Lil's Net Worth?

Lil probably holds an income of more than $1 million. Compared to him, American rapper Lil Wayne has a huge net worth of more than $150 million. He earns a huge sum through his music and lives performances. Lil even owns his own Youtube channel which has more than 1 million subscribers. Until now, he has collaborated with several artists like Chris Brown, Royce David, Trippie Redd, and BlocBoy JB.

Lil's past shows include performances in Finland, Norway, Sweden, Denmark, Germany, Netherlands, Belgium, France, UK, Ireland, and Los Angeles. He has more than 37 upcoming live shows across the United States.

Best Known as a Mumble Rapper

With his melodic flowing rap and tailored lyrics, Lil is the youngest hitmaker of his generation. His rap is widely considered to be a mumble rap. When Complex asked if he is a mumble rapper, he said;

I wouldn’t consider myself a mumble rapper, because I don’t know what that is. But when I talk, I mumble.

Sometimes Lil's music style is even compared to Canadian rapper Drake. Drake is a platinum-certified rapper, singer, songwriter and record producer. Now, Lil writes his own music and lyrics which is mostly based on his childhood at Seattle.