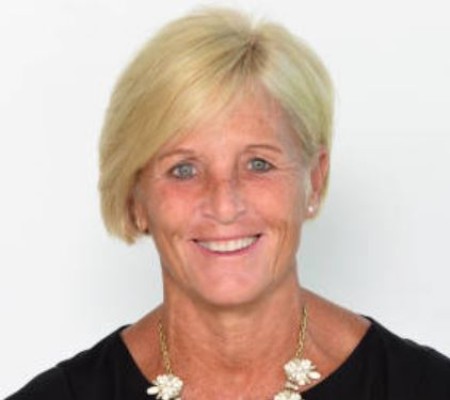 Lisa Lea Stone was born on August 14, 1962, in Madison, Wisconsin, the United States. She is 57 years old as of 2020. There is no additional information about her family background.

Lisa grew up in Oregon and played tennis, basketball, track, and field at Oregon High School. She earned second-team all-state honors as a junior and first-team honor as a senior.

Talking about her educational qualifications, Lisa has a bachelor's degree in physical education. Likewise, she earned a master's degree in athletic administration from the University of Iowa.

Lisa is married to her husband named Edward (Ed) Stone. She hasn't shared when and where the couple first met. Additionally, Stone prefers to remain silent when it comes to her personal life. Her spouse, Ed, is a certified public accountant. The couple shares two children, a daughter named Allison and a son named Tyler Stone.

Lisa's daughter Allison graduated from Wisconsin-Eau Claire in 2015. She was an All-Conference soccer player. She plans to study medicine and become a physician's assistant. Similarly, Lisa's son graduated from Saint Louis in 2017. He became the manager of Billikens men's team for four years.

While Lisa came back into her coaching career, her first year at Saint Louis was challenging. She lived alone far from her family. However, her husband supported her by taking care of the kids. The family of four currently lives across the Mississippi River in Edwardsville, Illinois. Like the Stone family, another basketball coach Jeff Hornacek and his wife Stacy Hornacek, has a joyful married life.

The head coach at Saint Louis University, Lisa Stone, has an estimated net worth of $800,000 as of 2020. She has been the coach at Saint Louis since 2012. However, she began her coaching career in 1985. Although female coaches are paid less than their male colleagues, Lisa has amassed a decent earning.

The average annual salary for the women's basketball coach ranges from $35,000-$46,000. Therefore, Lisa might earn around $43,000 per year. It is not known whether she has a contract with Saint Louis, but some female coaches has a contract of up to $2.4 million a year.

Lisa became the youngest four-year coach in the United States when she entered Cornell College in 1985. She then went to the University of Wisconsin-Eau Claire and became the head coach from 1988 to 2000.

From 2000-2003, Stone became the head coach of Drake University. Afterward, she returned to Wisconsin to train the Wisconsin Badgers. However, Wisconsin fired her in 2011.