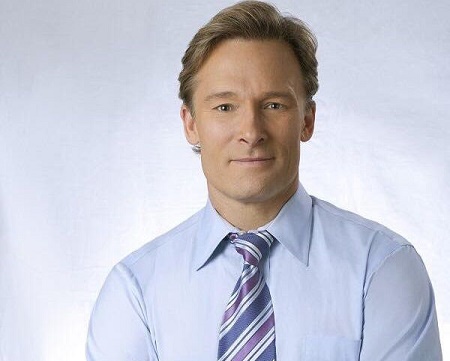 Lonnie Quinn is an American weather anchor and broadcast personality, probably famous as the lead weathercaster of WCBS-TV in New York. Today, he frequently works on sister radio station WCBS-AM 880. Prior to that, he worked for CBS This Morning Saturday as a weather anchor.

Lonnie William Quinn was born on 9 August 1963, in Cheshire, Connecticut the United States. Further, he has a total six brothers and sisters. However, there is no information regarding his parents' details on the media. So far, he holds American citizenship and is of white ethnicity.

The 56 years old Chief Meteorologist is a happily married man. As of now, he is in a marital relationship with his long term partner, Sharon Quinn. In early 2020, they have cherished their 13 years of a marriage anniversary.

Lonnie who is graduated from Boston College and his wife, Sharon tied the knot on January 13, 2007, in a private ceremony. But the couple has not disclosed their first meeting or love romance to the press.

Now, the married duo lives a blissful life together on the Upper West Side of Manhattan with their kids. So far, there have never been rumors of their extramarital affairs or sign of divorce's news coming out at any press.

Yes, the TV presenters is a proud dad of three kids, one eldest son, and two youngest daughters. His firstborn child is Nata Quinn, born on June 24 from his past relationship. But his first spouse details remain away from the media.

His son Nate previously attended The Bronx High School of Science and is graduated from Cornell University in May 2019. Now, the pair of father and son share a great bond together.

And Quinn shares two beautiful daughters Lily Quinn and Savannah Quinn with his current wife, Sharon. The couple gave birth to their first baby girl Lily in 2012. After 3 years of firstborn, they welcomed another bundle of joy Savannah on June 4, 2015, Wednesday night.

Savannah, now 5 years, who was born at NewYork Presbyterian-Columbia University Medical Center weighed 9 pounds at her birth time. Nevertheless, Lonnie revealed the birth of his third-born child Savannah by snapping the first picture with a new baby through Facebook and Twitter.

He wrote: “It’s just something else…I couldn’t be a happier person". And it's just the greatest thing in the whole world, he added.

Net Worth and Earnings of Lonnie Quinn

As of early June 2020, Lonnie Quinn has an estimated net worth of more than $1 Million. He has accumulated most of his fortune throughout his successful journalism and acting career. Another American weather reporter, Erica Colluraenjoys the same net value.

Currently, Quinn operates as Chief Weathercaster for CBS 2 on weekdays at 5 p.m., 6 p.m., and 11 p.m. And, as per pay scale, the average wage of CBS News employees is $63461 a year. Thus his compensation is also estimated in the same amount.

What Is A Bomb Cyclone- Lonnie Quinn

Asides his broadcasting field, Quinn also has made appearances in several TV series. His best-known TV roles were Will Cooney on ABC's All My Children (1988–1990) and Rich Landers on NBC soap opera Santa Barbara (1992–1993).

His other TV shows are As the World Turns, In a Moment of Passion, Saturday Early Show, The Early Show, ‘Kiss of a Killer, Dexter Dickie, and among others.