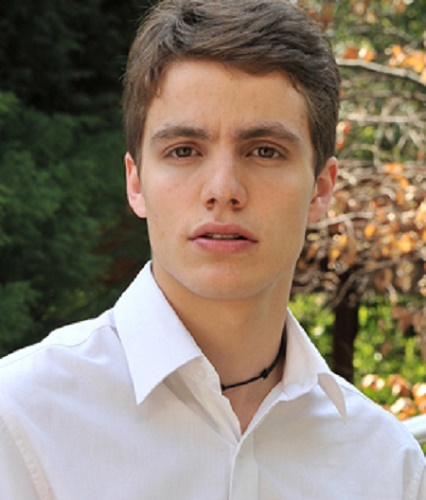 Lucas Balmaceda is one of the young Chilean actors who play various trans woman roles in theatre, film, and TV including Juana Brava, She is Cristina. He emerges as one of the faces of the young generations with a position and an existence increasingly free from gender distinctions.

Lucas Balmaceda Pascal was born to Dr. Jose Balmaceda and Veronica Pascal in Orange County, California on June 4, 1992. When he was three years old he returned to Chile with his family. Furthermore, he is the youngest of four brothers, including actor Pedro Pascal.

The TV star who studied at the Saint George College, Lucas is probably a single man as of 2020. So far, he has not shared anything about his love affair with the media or public.

Not to mention, when it comes to exposing his intimate matter, the 27-year-old sexy actor remains silent. In fact, he may be covertly hooked up with the one he loves, who knows?

Being the face of TV, Lucas, also seen hanging out with many co-stars and friends. Scrolling his Instagram post, multi photos can be seen with girls. It seems, he has ably maintained a pleasant relationship with them while meeting in functions.

No, Lucas does not consider himself cisgender Most of his fans wondered about his sexual identity in shows because of his trans-gender characters.

In fact, the actor has, in turn, questioned his sexuality and says that he identifies as somewhere in between both the feminine and the 'masculine sexuality at the same time.

Balmaceda claimed in one interview: "I try to break with both terms in order to become something beyond a simple category, to exist no gender definitions. Simply be Lucas". Thus, for now, there is no news regarding his actual sexuality.

When Lucas was in her fourth year of theatre in 2014, he appeared in the play La Noche Obstinada, by the Argentine choreographer Pablo Rotemberg. That same year, he made his debut on television, joining the cast of the channel 13 show The 80, in which he played Axel Miller.

In 2015, Balmaceda co-starred in the TVN television series Juana Brava and also appeared on Channel 13 in the soap opera Veinteanero at 40. In late 2016, he made his film debut in Test of Attitude, by Fabrizio Copano and Augusto Matte.

In 2017, Lucas appeared with his brother Pedro in the third season of the Narcos, show from Netflix. He also took part in three Chilean film productions in 2019: I don't want to be your brother, She's Cristina and The Prince.

Lucas played the part of Kassandra on August 1st, 2019, telling the story of a transmigrant trafficking contraband goods in a clandestine bar, premiered on the M100 microsala.

What is Lucas Balmaceda's Net Worth in 2020?

Chilean actor, Lucas Balmaceda has an estimated net worth of $1 Million as of early 2020. He might have bagged an appreciable remuneration over a long span of his performing career that has helped him accumulate such resources.

Chile's annual actor salary is $22,964,208 or $11,040 equivalent per hour. Therefore, as a popular and well-known television personality, his salary needs to be in the same amount. On the other hand, Lucas' brother Pedro Pascal enjoys an approximated worth of $2 Million.

Similarly, Pedro rose to fame after playing the roles of Oberyn Martell in the fourth season of the HBO show Game of Thrones and Javier Pena in the Netflix show Narcos. In the famous TV series, Game of Thrones, another actor Kristofer Hivju played the character of Tormund Giantsbane.