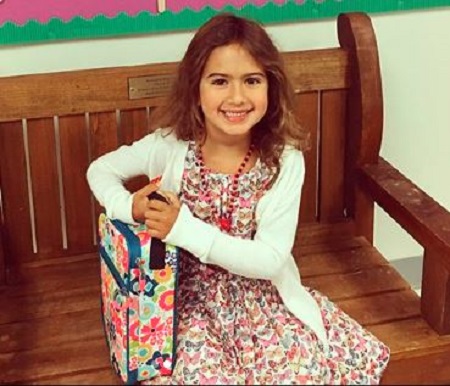 Mabel Ray Willis came into the spotlight as the superstar child. She is known as the eldest daughter of American famous, actor, producer, and musician Bruce Willis and his second wife, Emma Heming Willis, an model.

The celebrity girl Mabel was born on April 1, 2012, in the United States. She is the grandchild of Zorina Heming, Marlene Willis, and David Willis. She has a young sister Evelyn Penn Willis born in May 2014. Also, she has three half older sisters Rumer Willis, 32, Scout Willis, 28, and Tallulah Willis, 26, who are actresses. Her uncles are David Willis, and Robert Willis.

Mabel Ray who has celebrated her 8th birthday in 2020 is still young at dating games. Thus, she is currently enjoying her early days in her home in L.A. along with her parents and a little sister.

On the other hand, her mom, Emma, 42, and dad, Bruce, 65, are a fortunately wedded couple. They have been glittering their conjual relationship for over 11 years without any problems. The couple who have an age difference of 23 years first met through a mutual trainer's gym in 2007.

Two years later, they got married on 21 March 2009 at their residence in Turks and Caicos. But six days later again, they tied the knot in a civil ceremony in Beverly Hills, California. Because their first wedding was not legally bound. In 2020, Willis and Heming celebrated their 11-year wedding anniversary.

The beautiful couple has a great relationship over the years because they have a great deal of respect for each other, which has really helped to build a good platform. So they have managed to operate a blended family successfully.

The former spouse got hitched on November 21, 1987. Together they had three daughters named Rumer, Scout, and Tallulah. But they announced that they were no longer together on June 24, 1998, and filed a divorce petition on October 18, 2000. They need their marriage after 13 years of union.

Even after the spilt, the couple is happily co-parenting of their kids. Recently in early 2019 amid the coronavirus quarantine, the Moonlighting star quarantined with his divorced wife and their daughters. Demi even shared the photo of wearing matching pajamas on his IG account while Emma commented “Love and miss you guys.

How Rich is Mabel Ray Willis?

At the current moment, Mabel Ray is still young to start her own career. But she lives a lavish lifestyle with her wealthy parents being the star kid. Meanwhile, her mother, Emma has a worth of $5 Million. She has acquired her wealth from her modeling gigs.

As a model, Heming Willis, the 1.78 m tall, has walked for a runway for various fashion shows such as Victoria's Secret Fashion Show, Ralph Lauren, Valentino, Emanuel Ungaro, John Galliano, and few others. Also, she featured on covers like Spanish Elle, US Glamour, Shape, W Magazine. etc.

Whereas her dad, Bruce Willis has a whopping net value of $250 Million as of early 2020. Further, he has reportedly received around $52 million from the Die Hard franchise. In 1999, he took house $10 million from Look Who's Talking and got another $10 million for the sequel. He further made $55 million in 2000, mainly from two films, Unbreakable and The Kid.

For more details on celebrity daughters, do visit Married Celeb!!!