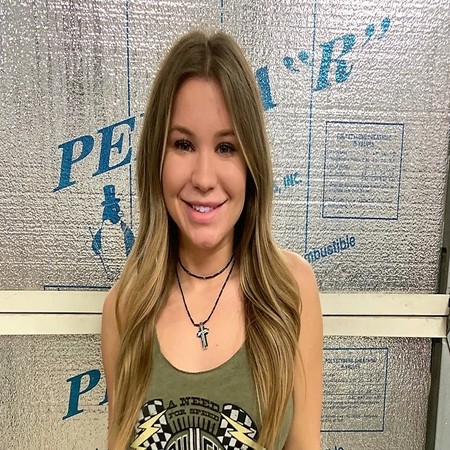 Have you ever watched the Discovery Channel's TV series, 'Street Outlaws? If yes, then you might be familiar with a face Mallory Gulley, a young female drag racer. Moreover, Mallory is one of the fewer celebrity stars who is more than just a pretty face and can be seen awarding the drag race winners they're earning on the Discovery Channel Series. Apart, she is best known as a JJ Da Boss' Money Girl. She has gained a lot of fame after appearing in the show Fans of the Street Outlaws spinoff, 'Street Outlaws: Memphis'.

The Street Outlaws drag racer, Mallory Gulley was born on December 31, 1996, in Jonesboro, Arkansas, USA. Her father's name is Kenneth Gulley and her mother's name is Cari Gulley. Apart, her parents own and run Gulley Bail Bonds and KEG Towing. She spent her childhood and adulthood days with her sister, Natalie Gulley. Further, she went to Arkansas State University for her higher education.

Moving towards the personal life of 23 years old, Gulley is probably leading a single life right now. As she hasn't shared any information regarding her boyfriend or relationship status yet. Besides, her social media account also didn't provide a hint if she is dating someone or not.

The Street racer, Mallory is fully focused on expanding and improving her professional career. So, she might not have time for her love life. Besides, she might be waiting for her prince charming who can support her in every situation of life. Apart, she loves to spend her free time with her family and friends.

Well, Mallory, 158 cm tall, has earned a decent amount of money by her profession. Furthermore, her estimated net worth is $250,000 similar to Jessica Samko. Besides, she earns an annual salary of $45,000.  Apart, she is an active member of her family business and works as a Bail Bond Agent at Gulley Bail Bonds.

As per some sources, the average salary for a bail agent is around $36,000 per year. Further, she also works at KEG Towing, another business endeavor of her parents. Apart, her family also runs a website called Kegmotorsports.com, where they sell apparel and accessories related to sports racing.

Back in October 2018, she also won the prize of $10,000 after winning a race in the show Street Outlaws: Memphis. She drives a purple '64 Chevrolet which she named as the Ugly Duckling. Similarly, she has a white Chevrolet Corvette Z06 which estimated cost is around $79,000. As of now, she is living a healthy life with her family.

Mallory is alive currently works at Gulley Bail Bonds as a Bail Agent. She also works as an employee at and KEG Towing. Besides, she appeared as a young street racer on the Discovery Channel's TV series, 'Street Outlaws: Memphis' show.

She has gained a lot of fame and name after appearing in the show in season 9 and 10 and also known by nickname Money Girl. As of now, she is preparing for her career as a street racer after completing her studies.