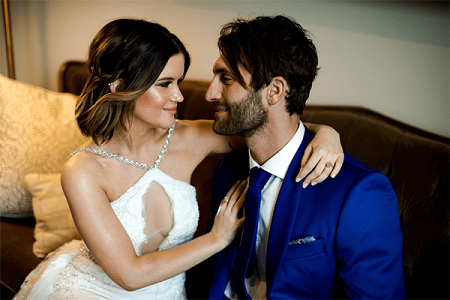 The country music singer and songwriter Maren Morris and her partner, Ryan Hurd, have now officially become parents. Yeah, you heard the facts. And a huge congratulations to the happiest parents of all time.

In fact, the beautiful lady, Morris, is no longer a young girl as she is the mother of one baby son. Then, how's her newborn?  Here’s everything you need to know.

The new mom, 29, and new dad, 33 happily gave birth to their firstborn son together on Monday, March 23, 2020. The name of the newly born baby is Hayes Andrew Hurd, who is sweet and cute.

The husband and wife, who married on March 24, 2018, proudly announced Hayes' birth on their own social media account. The award-winning country star posted a cuddling photograph with her baby boy with the caption: “Hayes Andrew Hurd. 3/23/20.  Love of our lives.

Maren posted three different photos on the same post, including, carrying her sleeping son in a Nashville hospital bed and a shot of a smiling Hurd carrying Hayes baby.

The proud dad also posted his own pictures on Instagram with his son Hayes Andrew on the same day. Nevertheless, the middle name of the newborn honors Ryan's late brother, Andrew Kellow Hurd who died on 23 August 2010 in a car accident at age 16.

Before welcoming their son, the singer Morris revealed that she was pregnant last fall. And since then, the parents to behave kept up-to-date their fans about their lifestyle and parenting experience.

In 2019, both Maren and Hurd attended the 2019 CMA Awards where Maren wore a light blue gown in memory of her mother. Also, she shared the incredible media experience: It's kind of cool to think that we can look back on this footage when he's old enough and be like, ‘You were in there!'".