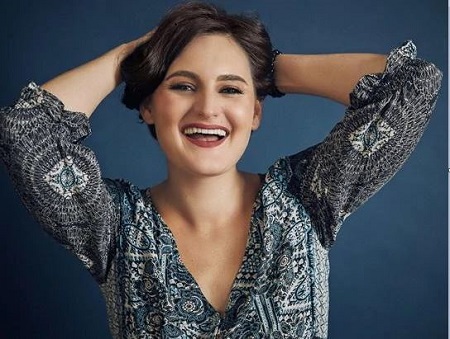 Have you ever watched the American television series Star Trek: Discovery? If yes you must be familiar with the actress Mary Chieffo who represented the character of Klingon L'Rell from 2017 to 2019. Likewise, she made her acting TV debut at the age of three by appearing in short film Making Sandwiches.

Mary Elizabeth Chieffo was born on November 7, 1992, in Los Angeles, California, United States. She is the single child of actress Beth Grant and her husband, Michael Chieffo. For her education, she earned her bachelor of fine arts degree from Juilliard in 2015. So far, she holds American citizenship and is of white ethnicity.

Well, the answer is no. Chieffo, aged 27, has not tied the wedding knot with anyone until now. Thus, she is yet to have a husband. Further, she rarely shares details regarding her private stuff to the media as she keeps it away from the limelight.

Hence, her love life has remained tight-lipped, making her fan curious about her to know about her relationship. Due to her low key life, it's hard to find out whether she's actually romantically linked to any guys or not.

Even after scrolling her social media account, it indicates that she doesn't have a partner and is just relishing her time with friends and family. So Chieffo who is 1.83 m tall is probably a single lady.

It seems she might be focused on her work right now or might be waiting for a Mr perfect to fall in love with.

Being an actress, Mary Chieffo receives a substantial amount of fortune through her work in the entertainment industry. Her net worth is estimated to be over $500 thousand, as of July 2020. She credits her fortune to her professional acting career

Meanwhile, the actor/actress makes $57,060 a yearly salary in the United States. So looking at her dedication to work, her annual income is assumed to be around $45,000, for portraying in several short movies and TV shows.

Well, Mary came to fame when she starred in web TV drama Star Trek: Discovery which was created for CBS All Access by Bryan Fuller and Alex Kurtzman.

In the show, Chieffo played the recurring role of L'Rell, a Klingon fighter, and spy who became the leader of the Klingon Empire at the end of the 1st Season. She shared the display with Doug Jones as Saru and Mary Wiseman as Sylvia Tilly as Ensign.

Besides it, she has performed on numerous TV shows and films like Natural Disasters, Herpes Boy, Miss Dial, Shelby's Vacation, The Mindy Project, and On the Day You Were Born, among others. Added to that, she starred as a voice actress in Welcome to Paradise in 2007.