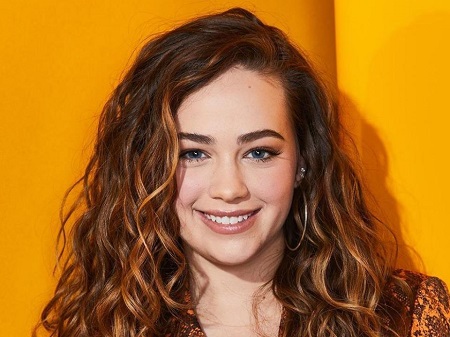 If you are watching the Netflix's martial arts comedy-drama streaming TV series, Cobra Kai? Then you must be familiar with the character Samantha LaRusso, played by American actress Mary Mouser.

Before the show, she made her breakthrough role with the character Lacey Fleming on the TV series Body of Proof on ABC. Today let's talk about her personal life in the following sections.

Is Mary Mouser Dating Anyone?

Well, the answer is yes. The 24 years old beautiful actress Mary Mouser is no more single. As of now, she is in lovey-dovey
relationship with her boyfriend, Brett Pierce for the last five years, as per her Instagram post.

Mouser met her better half Pierce for the first time at a party in 2015. And ever since the lovely couple have been enjoying their every other company. Recently on December 19, 2020, they have celebrated their fifth years of love anniversary where they have shared each other memories and sweet sentiments on social media.

The actress wrote: " five years with you has felt like five minutes. happy anniversary to the most spectacular boyfriend". It seems the pair are so much in love together.

Just like her, Brett is an actor who is known for his works in Stuck in the Middle, A Million Little Things and Grey’s Anatomy.

How Much is Mary Mouser Net Worth?

As of 2021, Mary Mouser has an impressive net worth of $2 million, according to Celebrity Net Worth. She has built her fortune throughout her acting career. Well, she debuted in the media industry at the age of five when she was selected for Abigail Breslin's role in Signs.

Further, Mouser is now starring in TV series Cobra Kai, premiered in April 2018, While Ralph and William Zabka reportedly earned $100,000 per episode in the season two. So we can conclude that she must be making about $50,000 per episode for her performance in the show.

Further, one of her hit film, Bride Wars became a box office success earning $114.7 million against $30 million budget. Her next film Alexander and the Terrible, Horrible, No Good, Very Bad Day has earned $101.4 million worldwide against a $28 million budget.

Cobra Kai is the continuation of the Karate Kid trilogy that was published in the 1980s. The first two seasons of the sequel series were produced from 2018 to 2019 by YouTube Red. Later, Netflix bought the series in June 2020 and launched the third season on January 1, 2021.

It follows the lives of Ralph Macchio as Daniel LaRusso and William Zabka as Johnny Lawrence. And on October 24, 2017, actress Mary Mouser also got a chance to play the main role. Now, she playing the Daniel LaRusso’s 16-year-old daughter, Samantha LaRusso's role, alongside Tanner Buchanan, Jacob Bertrand, Hannah Kepple, Griffin Santopietro, among others.

Before the show, the 1.6 m tall Mary came to limelight after playing the role Lacey Fleming on the TV series Body of Proof. More, she has given voicework for several TV shows and films such as Dragon Hunters, The Hole, Son of the Mask, Pom Poki, Me, Eloise, and more.

Mary Mouser was born on 9 May 1996 in Pine Bluff, Arkansas, United States. Her birth name is Mary Matilyn Mouser. She is the daughter of Scott Mouser (father) and Tina Mouser (mother).

Mouser has two siblings, an elder brother Aaron Parker and a little sister, Ashley Mouser, 23. Both of them are from the entertainment industry. So far, she holds American citizenship and is of white ethnicity.

She is a graduate of Hogwarts School of Witchcraft and Wizardry.