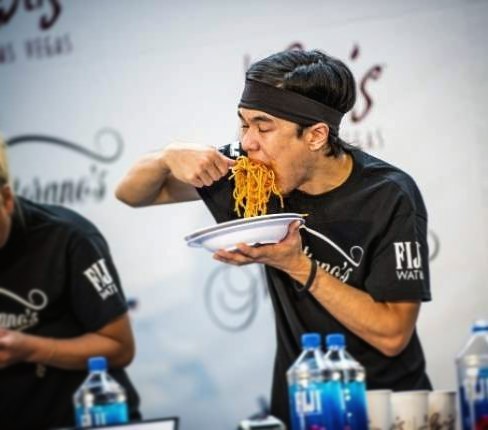 Matthew Kai Stonie aka Matt Stonie, is a prominent American competitive eater and YouTuber. He rose to prominence when he defeated the 8 times Nathan's Hot Dog Eating Contest, Joey Chestnut in 2015. Likewise, he has also a YouTube channel which has over 9.51 Million subscribers as of now and collaborated with other YouTuber such as Alex Hayes, Roman Atwood.

The YouTuber has gained a tremendous amount of name and fame in his field. Whatsoever, people are more curious to know more about his personal life;

What Is The Current Relationship Status Of YouTuber?

Matt Stonie is possibly single as of now and out of dating rumors. He is pretty confidential about his personal life and prefers low-key, which might be the reason; he rarely talks about his intimate life to the public.

Even though Matt has a significant presence on social media with 255k+ followers (2019), he does not share any pictures or status, which concerns about his personal life or love life. Mostly, his Insta posts are related to the food challenge.

Being an internet sensation and a well known competitive eater, Stoni must have earned a hefty sum of fortune from his career. His net worth is around $700 thousand as of 2019, which is close to fellow YouTuber, Candy Godiva.

Matt Stonie was born and raised in San Jose, California to American father and Japanese mother. Moreover, he has Japanese, Czechoslovakian, and Lithuanian ancestry.

Check out the chips challenge video of Matt;

On June 2010, the internet personality uploaded his first YouTube and till the date he garnered more than 9.59 million+ subscribers on his Youtube channel along with 1.7 billion views. Since then, he has uploaded many food challenge videos, among them, Epic Chill Cheese Fries, 20,000 Calorie Superbowl Challenge, 203 Chips Ahoy Challenge are popular among the audience.