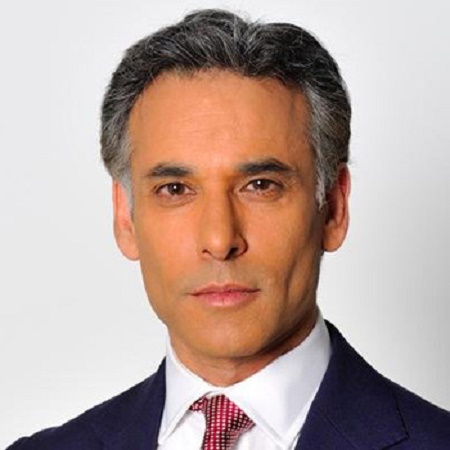 Do you know? Matthew is the main presenter of Global Matthew Amroliwala at 1500 hrs GMT on BBC World News. Occasionally, he serves as a relief presenter for BBC News at One on BBC One. Despite the busy schedule, he still maintains to spend some special moments with his family.

So, let's take a turnover on his married life in the following sections

The reporter who graduated from St Chad's College has been living a joyful conjual relationship with his wife, Jackie Long for over two decades. She is a fellow journalist who works for Channel 4 News Social Affairs Editor.

Matthew and Jackie, however, have not disclosed how they first interacted and their dating background with the public. Therefore, we can believe that this strong couple might be dated for a few months or years before becoming a wife and husband. In June 1999, the couple exchanged the vows at private functions.

Their big was held in the presence of the groom and bride's family members and close friends only. The two have recently celebrated the 20th anniversary of their marriage in early 2019. So far, there are no reports of an extramarital affair between which leads to divorce or seperation.

The Newsreader who is 58 years old is the proud dad of five kids. He and his other half Long gave birth to their five youngsters together from their lengthy marriage.

The names of the children are Milo Amroliwala, Louis Amroliwala, Mary Amroliwala, Mabel Amroliwala, and one more. This low key couple has not disclosed any extra information about their offsprings to the media.

Once Amroliwala said: " It's a good thing I had kids quite late in life because it gave me enough time to do all the stuff I wanted. I don't go out at all these days". But most of his private stuff he always keeps in himself or hidden.

A Little Sneak Peek About his Reporting Works

In 1989, Matthew joined the BBC Network as an accountant and became a reporter for BBC network TV in 1990. Then, later, he started his work as a presenter on the BBC News Channel in 1997.

Born and raised in Yorkshire, he started presenting the news program in the late afternoon, first with Jane Hill and then with Maxine Mawhinney. Further, he also presented the Crimewatch program from January 2008 to March 2015 together with Kirsty Young, Rav Wilding (later Martin Bayfield).

During his career,  Amroliwala has covered many of the big news stories including Bosnia about the collapse of Srebrenica, reporting extensively from Northern Ireland, and many others.