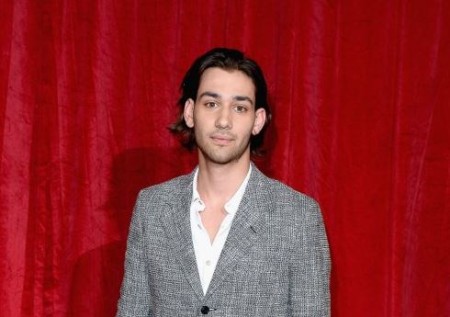 Maxim Baldry is an American actor who appeared as Stepan in Mr. Bean's Holiday alongside Rowan Atkinson. He is further best known for his roles in the drama series, such as Years and Years, Hollyoaks, Rome, etc. He has been active in the entertainment industry since 2005.

Maxim Alexander Baldry was born on January 5, 1996, in Redhill, Surrey, England. He was born to an English father, Simon Baldry, and a Russian mother, Carina Baldry. Maxim has an older brother named Vic Baldry, who works in Sales & Marketing. Although born in England, Baldry lived in Moscow until age seven. He joined Jacke Palmer Stage School in 2005.

Does Maxim have a girlfriend?

At the age of 24, Maxim is living happily without having a girlfriend. The adorable actor is popular among all generations, especially among ladies. Maxim gracefully portrays romantic roles on-screen. However, he has never been public about his relationship status. Also, he hasn't shared whether he had affairs in the past as well.

The 5 feet 10-inch tall actor might be focused on expanding his acting career. Despite being active on social media, Baldry rarely speaks about his personal life. Unlike him, another young English actor, Josh O'Connor, is romantically involved with his lover.

Due to his secretive nature, a few online tabloids spread the false rumors about Maxim being gay. However, the actor doesn't prefer to justify his sexual orientation as he is not affected by false claims. Being single seems not so boring for Baldry as he spends his leisure time traveling and singing with friends.

The Years and Years actor Maxim Baldry has an estimated net worth of $3 million as per celebritynetworth. Baldry has made a decent fortune through his over a decade of an acting career. Like him, another British actor, Jack Waters, also has a decent fortune.

At present, Baldry is represented by agencies such as Industry Entertainment and Independent Talent in the UK. For starring in television shows, he earns over $45,000 per episode while his salaries in movies depend upon the contract.

Some of the few movies in which Baldry worked made an astonishing amount at the Box-Office. For example, the 2007 comedy film, Mr. Bean's Holiday through which Baldry made his breakthrough, collected $232.2 million. Similarly, in 2019, he appeared in a romantic comedy, Last Christmas, which made $121.6 million at the Box-Office.

Baldry appeared as an Ancient Egyptian child, Caesarion, in the 2007 television series, Rome. He received applause from critics and fans for his performance as Stepan Dachecsky in the 2007 superhit comedy, Mr. Bean's Holiday. He appeared alongside brilliant actors such as Rowan Atkinson, Emma de Caunes, and Willem Dafoe.

Further, Maxim appeared as Liam Donovan in the British soap opera, Hollyoaks. In 2018 he portrayed the character of Dane in the horror film, Lake Placid: Legacy. Besides, there is a rumor about Baldry set to star in a lead role in the Amazon Prime adaptation of The Lord of the Rings in 2021.