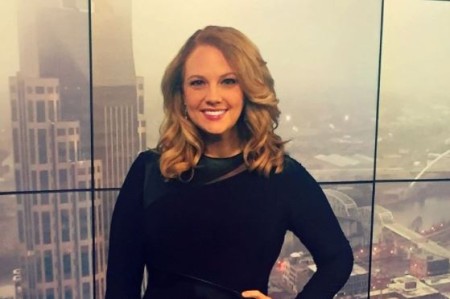 Melanie Layden is an American meteorologist who currently works for WSMV-TV as a weekend morning meteorologist. Previously she worked as a traffic anchor for the same station. Before WSMV, Melanie was a traffic reporter/producer at WAAY-TV. There she worked for two years. Layden has been nominated for four Emmy awards winning one.

Melanie is a native of Jackson, Tennessee. She celebrates her birthday every sixth of August, but she hasn't shared her birth-year. Layden earned a degree in Broadcast Meteorology from Mississippi State University. Further, she graduated with a Broadcast Journalism degree from the University of Mississippi. She is a member of the National Weather Association and the Junior League of Nashville.

As of now, the gorgeous weather reporter is not married, so she doesn't have a husband. However, Melanie once posted a picture of her boyfriend on her Facebook page. On August 16, 2017, she shared an image with the caption: "Back at work this morning after being off for a few days to celebrate my birthday and my boyfriend's birthday-- we have the SAME birthday-- how crazy is that??"

At present, Melanie doesn't talk much about her boyfriend, neither she has posted his photos. Further, it seems like the couple has ended their relationship. There is no information about their dating history. Since then the meteorologist has been living a single life. Layden hasn't revealed when she will get married.

On her leisure time, Layden likes to visit the elementary schools in Nashville to teach kids about weather. She and her colleague, Holly Thompson, share a good bond. They often visit different places to enjoy a post-work vacation. Over the past few months, Melanie has lost some weight, and her on-screen presence is incredible.

The WSMV-TV meteorologist, Melanie Layden has an estimated net worth of $300,000 which is similar to another weather anchor, Laura Bannon. Layden as a weekend morning meteorologist earns an annual salary of $73,257.

The average salary for meteorologists in Nashville is around $90,994 as of 2020. Further, the yearly pay ranges between $70,280-$112,975. Several factors contribute to a reporter's income. For example, anchors with higher education, qualifications, skills, and several years of working experience earn more money.

The reporters at WSMV received a substantial amount of money. One of the most longest-serving news presenter at WSMV, Demetria Kalodimos used to earn over $300,000 a year. There is no doubt that Layden lives an extravagant lifestyle.

Melanie is the winner of the 2018 Regional Emmy Award for Best Morning Newscast. She began her career with Fox 40 in Jackson, Mississippi. Then she joined WAAY-TV, in Alabama in October 2012. For two years, Melanie worked there as a traffic reporter/producer until December 2014.

After leaving WAAY, Layden joined WSMV in Nashville, where she served as a traffic anchor until June 2019. Then she moved to the weather team and began working as a weekend morning meteorologist.