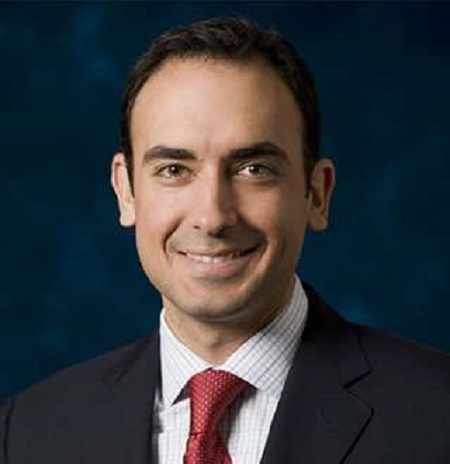 If you watch the news on CNN, then you must have been familiar with the name Kate Bolduan. But do you recognize her husband, Michael David Gershenson, an American real estate businessman?

Gershenson is an American real estate businessman who currently works as managing director for The Carlyle Group, an American multinational private equity. Gershenson wasn't a popular individual until his marriage with the anchor of At This Hour With Kate Bolduan.

Officiated as Wife, Kate Bolduan Since 2010

Michael David Gershenson and his marital partner, Kate Bolduan shares a very healthy bond with each other. Since the first day of their meeting in the year 2005, there were not so aware of taking their relationship so far. However, if things are meant to happen, it happens.

After dating for almost half a decade, Michael and Kate decided to take their bond to the whole next level. With the acceptance of their family members, they ideally took their romantic bond into marriage.

Gershenson and Bolduan tied the holy knot on 30th May 2010 in New York. The ceremony was held in a private event with an attendance of very few guests, including their family, friends, and co-workers. They might have planned for white dress code as they both were twining the color, bride with a white wedding gown and groom on a white tuxedo.

Their marriage created several news headlines as his spouse is a prominent face of television. Many fans and her followers were eagerly waiting for this moment so; now they got it.

Besides, David is not active on social networking sites while her partner shows off her intimate pictures with husband on social media sites. Recently, the couple also celebrated their eight-year anniversary, which clearly depicts that how well they are maintaining their chemistry.

Michael and Kate are the supportive and proud parents of two kids. Since the wedding, the couple first became parents on 25th September 2015 when they gave birth to a daughter named Cecelia Eve Gershenson.

Lately, in July 2017, Kate announced that she is pregnant with her second child via her Instagram. Shortly, they welcomed their second daughter Delphine Esther Gershenson on 25th December 2017.

Now, the lovely family lives in New York. Meanwhile, the couple may have a busy schedule, but they always give enough time to their daughters.

TV reporter, Bolduan has worked with the TV various network for one decade. So, she has made a name herself, and her progress has significantly increased her fortune. As per some sources, she has a salary of more than $66,307 per annum at CNN.

Being a veteran journalist, kate must be receiving quite a remuneration which aided in the growth of her bank balance. The most interesting fact is that she has ably gained much prosperity than NBC journalist, Hallie Jackson.

Get a Sight of his Career

Currently,  D. Gershenson is working as a Managing Director at the Carlyle Group, focused on U.S. real estate opportunities. Likewise, he is liable for all elements of investment in real estate, with a focus on New York and Boston as well as a concentrate on retail and industrial properties.

Moreover, Michael is also an investment company established in Washington, DC, in 1987. Prior to joining Carlyle, Michael was with Deutsche Banc Alex Brown’s mergers, acquisitions and corporate advisory group in New York. This is a group of Raymond James where Michael specialized in real estate transactions.