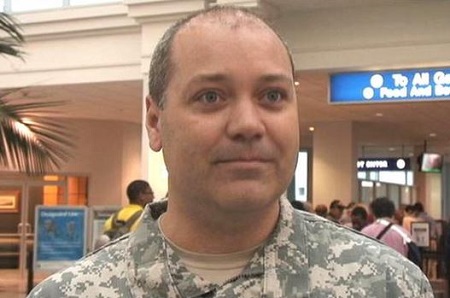 Michael Haley is an American soldier and military technician who currently serves as a commissioned officer in the South Carolina Army National Guard. Further, he became the first gentleman of South Carolina where he served from January 12, 2011, to January 24, 2017. But, he is best known as the husband of former Governor of South Carolina, Nikki Haley.

Although his exact birth year is not known to the media, Michael celebrates his birthday on February 7. He was born in somewhere the United States to the parents Carole Haley, and Bill Haley. He holds American citizenship and is of white ethnicity. For his education, he graduated from the University of North Carolina at Charlotte with a degree in business administration.

How Long Micheal and Nikki Haley Are Happily Wedded?

It is a matter of the fact that Mr. and Mrs. Haley has been living a fortunate conjual relationship for over two decades. Recently in 2019, the couple has celebrated their 23 years of a marriage anniversary.

Michael first met his wife, Nikki while studying at Clemson in 1989. At that time, they were undergraduates of Clemson University. After seven years of togetherness, the lovebirds tied the wedding knot on 6 September 1996 at St. Andrew's by-the-Sea in both Christian and Sikh gurdwara.

Further, the president of Viewpolitik, Will Folks admitted on a local anti-Haley conservative group that he and the governor had a love affair in 2005. Also, the lobbyist Larry Marchant and Andre Bauer claimed that Nikki and Will had one night stand in 2010.

But, Haley who was born as Nimrata Nikki Randhawa to Ajit Singh and Raj Kaur Randhawa denied this. While the federal military technician admitted that he has no solid proof.

From their marriage, the duo shares two beautiful kids, a daughter, and a son. The couple welcomed their first child, a daughter named Rena Haley, on 8 June 1998. She is studying at Clemson University.

Similarly, Nikki, the former ambassador to the United Nations gave birth to their second child, a son named Nalin on 6 September 2001.Now, his age is 19 years old. Together, the family of four participated and celebrated the Diwali ceremony back on 19 October 2017.

What is Michael Haley's Net Worth?

Meanwhile, Michael's exact net worth is not mentioned anywhere but it is speculated to be more $1 Million. His source of income is his professional work as a soldier and military technician of the South Carolina Army National Guard with the Department of Defense.

Similarly, the Army National Guard's federal technician makes the salary between $37,682 and $66,498. So, his annual income is also estimated at the same amount. On the other hand, his wife, Nikki's total net value is approx. $4 Million as of 2020.

Apart from that, Haley sold investment property she took from her parents for $1.2 Million in January 2018. Reportedly, she resigned from the Boeing board over its coronavirus bailout bid.