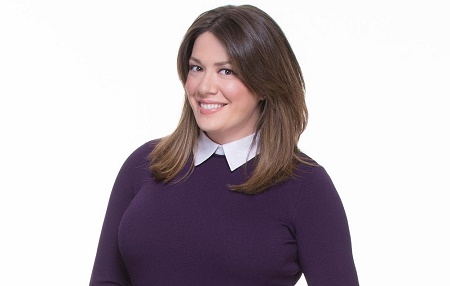 If you're a frequent viewer of the American Comedy show, The View, then Michelle Collins, is no new name for you where she co-hosted the nineteenth season in 2015. Now, she's hosting her regular SiriusXM program, The Michelle Collins Show from 7-10 AM ET every weekday morning. Also, on Comedian, she was the host of the new TLC Channel program "90 Day Live."

Michelle Elizabeth Collins was born on 9th July 1981 in  Miami Beach, Florida to the parents, Judy and Mel Collins. Further, she has one older brother whose identity is unknown to the media. She holds American citizenship and is of white ethnicity. As far as her education, she graduated from Barnard College in New York with a B.A. in Art History.

Michelle Collins, 38, the stunning performer, and talk show host, is reportedly an unmarried woman. She is a fairly private woman who wants to keep her love affair inside or out of the limelight. So for now, it remains unknown whether or not she is currently in a relationship with anyone.

Nevertheless, The Gossip Queens' former co-host has never posted any pictures or dropped any clues about her love life on social media. But still, Michelle gives a glimpse of hanging out with her nearest male colleagues, and co-stars.

Thus, Collins seems to be living a happy single life without dating any partner or lover. She is also a pretty workaholic who mostly concerts on her jobs.

How Much Net Worth Does Michelle (Comedian) Have?

Michelle Collins has already made her name in the showbiz industry, as a most talented TV personality. Her net worth is estimated to be over $1.16 million as of early May 2020. She has accumulated this suitable amount of fortune throughout her professional career as a TV host and comedian.

In the U.S., the comic receives an average wage of about $14.94 an hour while the tv host gets $58691. Thus, looking at her career graph, there is no doubt, Collins' earning the same income in the same amount. Similarly, some well-known comedians like Bill Burr and Nikki Glaser make a decent amount too.

Daytime Emmy Award winner, Michelle got popularity after signing on The View for the nineteenth season as co-host on July 13, 2015. She and her co-host, Joy Behar, even faced criticism on 4 September 2015, after making controversial comments about Miss Colorado Kelley Johnson 's performance in the Miss America competition. She also faced another backlash after she joked that the face of presidential nominee Carly Fiorina seemed 'demented' when smiling during a primary debate.

Collins then fired from The View 'on 3 June 2016 because of these two scandals. Afterward, she started hosting the All My Gay Friends Are Getting Married in 2016 on ABC. She further has hosted the 'After Paradise,' Bachelor's live Paradise after-show, and two other Lifetime TV shows: Little Talk Live and Date Night Live.

In 2018, the 1.85 m tall launched her show on SiriusXM 'The Michelle Collins Show.' Even so, on 8 July 2018, she became the host of the new TLC Channel series "90 Day Live," which takes place immediately after the weekly show "90 Day Fiancée: Happily Ever After? "At TLC.