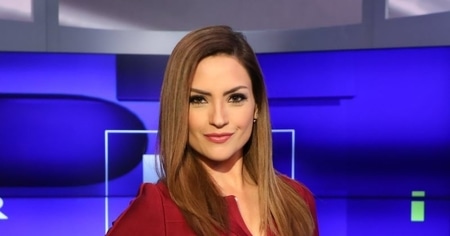 Michelle Galvan is a Mexican News anchor. She is known for being a member of Univision. Galvan worked on ESPN Latino as a sports anchor in 2002.

If you know her, then you might know that she is married to Fernando Guajardo. But do you know if they have a baby? Or have you ever wondered how much is her net worth? To know all the information on Galvan, scroll slowly!

Let us clear one thing about Michelle Galvan’s personal life; she is not a single woman. She held her wedding ceremony with her boyfriend, Fernando Guajardo, on July 29, 2014. The couple kept their marriage ceremony private as only their close friends and family attended the big day.

After the wedding, the pair gave an interview with Plan B where, Galvan showed her bridal dress and engagement ring. The star usually posts a picture of her day to day life. Especially with her spouse and is frequently seen clicking pictures with her friends from her work.

The ESPN Latino Sportscaster suffered two pregnancy losses in February 2018 and November 2018. On the vacation to Paris, the pair announced the pregnancy of their first child, a son which they named Lazaro.

The duo were very excited about their first child as it was a miracle. Some years back, doctors told Galvan that she can never be a mother because of her illness with endometriosis and thrombophilia. But the child died before he was born.

Similarly, in November 2018, she was expecting again; this time it was a girl. The pair named her Roberta and bought so many things for their unborn child. Galvan and her spouse suffered a similar fate again as she suffered from another Miscarriage.

Michelle Galvan has amassed a huge amount of wealth, and her net worth is above $4 Million. As of 2020, she is a 32-year-old sportscaster and weather reporter has 14 years of experience as a TV show host, co-host, and weather reporter, so she earns over $58,000 per year.

Additionally, Galvan is also a social media personality and has massive fans backing her career up. Similarly, a journalist like Lilia Luciano has a fortune of around $1 million.

At first, Galvan was interested in molding, but later she focused on the career of a journalist. Galvan started working as a weathercaster in TV Azteca for a year.

Then she worked as a sports anchor for the channel, ESPN Latino, in 2002. After that, her career took her in many places to do her work. In 2017, she even appeared on the famous show Primer Impacto as a co-host.

Michelle Galvan was born in Mexico on 20 December 1987. She is Mexican and is of white ethnicity. She grew together up with three siblings.

Growing up, Galvan completed her studies with a degree in Marketing and Journalism from Universidad TecMilenio, which located on Monterrey, Mexico.

To know more about Journalists and Sportscaster, stay tuned to Married Celeb!!!