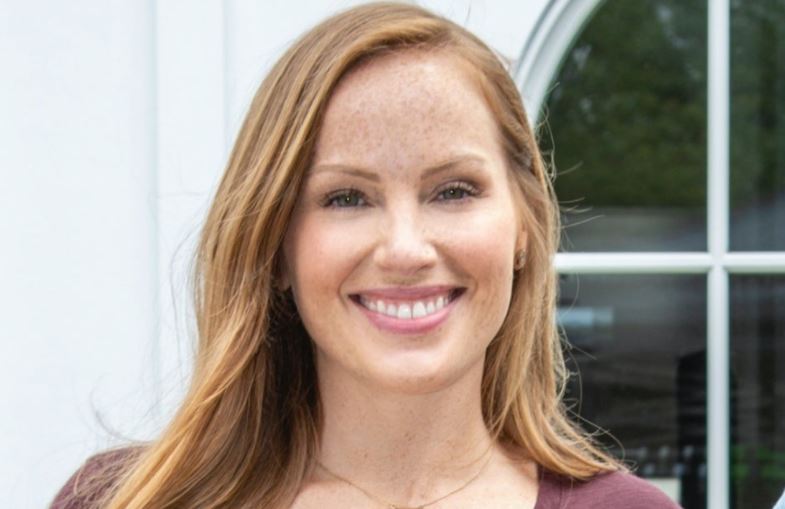 Mina Starsiak is an American realtor, tv personality, and author who is best known for appearing in HGTV's reality show, Good Bones. She also participated in other shows like A Very Brady Renovation and Rock the Block.

Mina appears on Good Bones alongside her mother, Karen E. Laine, and other family members. Further, the mother-daughter duo owns a renovation company called, Two Chicks and a Hammer. Well, Starsiak has over a decade of working experience in home renovation.

The 36-year-old, tv personality is a married woman. Her husband is a mysterious tattooed handsome hunk named, Steve Hawk. Well, Good Bones' viewers probably have seen him helping the renovation crew for his wife. So, when did the couple got married? How did they meet?

The couple first met in 2013 and after three years they tied their knot. Steve had proposed to Mina in 2015 sending her on a scavenger hunt. Then, he popped the question on the 50-yard-line of the Indianapolis Colts' training field.

Their marriage ceremony took place on June 11, 2016, in Indianapolis, Indiana. The reception was held at the city's old 1899 building. Instead of the wedding cake, Steve and Mina served 400 special donuts to guests. The pair has been married for over four years.

Those who follow Mina Starsiak probably know her struggles of getting pregnant for the second time. She even tried acupuncture and a fertility bracelet, Ava Women. Starsiak chronicled her IVF journey on Good Bones and updated her viewers about her health condition.

Luckily, Mina and her children are healthy and happy. The family of four resides in Indianapolis, Indiana. She and Steve parented their niece, Julie as her foster parents. Recently, the couple announced that they are done having kids revealing about Steve's vasectomy as well.

People say everything happens for a reason. Well, at first Mina thought Steve could really make a perfect partner. However, she realized every people has some defect and decided to give love a second chance. Despite Steve's bad behavior, Mina stood by his side and saw a good person beneath him.

It was 2013 when Starsiak first noticed Steve on Facebook. She thought he was a stunningly handsome guy. They connected through mutual friends and later went out on a group date to see a baseball match.

Mina wanted to know Steve better but he didn't give her a single ounce of attention. The tv star recalls: "He ignored me all night. He let his friends hit on me." Somehow she got his number and texted him for the next meet-up.

As per Karen, her daughter and Steve struggled a lot during their early relationship. They even broke-up but later decided to be back together. Although Karen liked her future son-in-law at first, she doubted him the second time. With time Mina and Steve's bond grew stronger.

In an interview, Karen said: "I don't really think first impressions matter, because I love him. I love him because we have been through some conflict and struggle together and we have grown in that. We have both committed to working through that."

The longtime house renovator, Mina Starsiak has a net worth of $1 million as of 2021. She earned a majority of her income through tv shows, and as a realtor. Additionally, Mina with her mother, Karen co-owns a home renovation business, Two Chicks, and a Hammer, Inc.

Starsiak and her mom founded their family home rehab business, Two Chicks in 2008. Recently, Karen announced that she would retire but would appear on Good Bones. Further, Mina published a book called, Built Together.

Mina was born on November 26, 1984, in Indianapolis, the United States. She was born to Karen and Casey Starsiak (father). Her parents split up after having two more kids, William and CR. Mina also has a half-brother named, Tad Starsiak.

Mina's mother is a former defense attorney, while her father worked as an orthopedic surgeon. Talking about her education, Starsiak minored in business and sociology at the University of Indiana.