Home news Model Jourdan Dunn Shows Her Engagement Ring & Is Excited To Be A New Bride!

Model Jourdan Dunn Shows Her Engagement Ring & Is Excited To Be A New Bride! 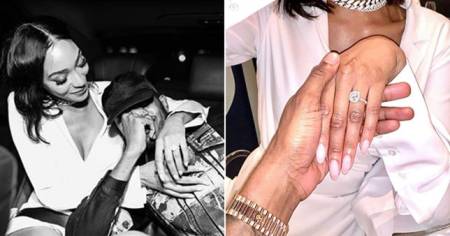 English supermodel, Jourdan Dunn got engaged with her boyfriend, Dion Hamilton, on Saturday, February 1, 2020, in Jamaica. Dunn met her fiance a year before in 2019, and since then, they are happily continuing in their blissful relationship.

British Vogue cover model, Hamilton's fiance, Dion Hamilton is a professional rapper and the founder of a fashionable streetwear brand, Lizzy in 2019. The bridal is enjoying their company for more than a year and planning to exchange their wedding vows in a grand nuptial.

American rap artist, Dion proposed Jourdan while the two traveled to Jamaica for a vacation holiday. At the time, Jourdan's son, Riley Dunn was also with her and Dion. On 2nd January 2020, Jourdan posted a picture while posing on the beach via Instagram.

The 29-year-old model wrote an appreciating caption for her fiance, who stepped into her life in 2019 and her beloved son, who entered her life in 2009. Lastly, she said they are priceless and wanted them to be her side always.

At the end of their vacation, Hamilton decided to give Jourdan a mesmerizing surprise with a proposal for marriage while having dinner in Jamaica on 1st February 2020. Up to this, Dion then pulled out his 2-carat oval ring, designated with a full halo and diamond band, which costs $24,347 (£22,000) and proposed Jourdan for marriage.

With lots of happiness on the face, Jourdan accepted her partner's marriage proposal and got engaged afterward. She later posted a picture when she was closing her eyes, and her fiance was holding her left hand, in which she wore the expensive ring through Instagram on 2nd February 2020.

Before Dunn's relationship with Dion, she was involved in a romantic relationship with a street dealer and the father of Riley, Jordan Cummings, for more than four years. Unfortunately, their relationship ended after Jordan was arrested in the crime of possessing cocaine and intent to sell it on 25th February 2010. Likewise, some other celebrities, including Nolan Betts, also separated from his former partner, Brooke Hyland.