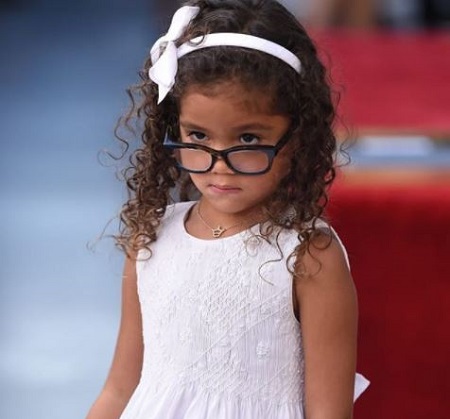 Monroe Cannon is an up-and-coming actress who is best known for giving her voice Michelle in the animated film All I Want For Christmas is You in 2017. Moreover, she is famous for being the daughter of Mariah Carey and Nick Cannon.

Her mom, Mariah is an American actress, singer, and songwriter who has released fifteen studio albums that features the hit songs like Vision of Love, Hero, Without You, and others. While Nick is rapper, host, and comedian who has hosted the TV programs like The Nick Cannon Show, America's Got Talent, etc.

Moroccan is just 9 years old is yet to start a romantic relationship with anyone. So she is quite busy spending family and school time with her parents and brother.

On April 30, 2020, she and her twin brother Moroccan have celebrated their 9th birthday along with her mom and friends. The virtual party looked to be Roblox themed. On their birthday, they wore a white shirt with the names "Roc & Roe" printed on it.

Apart, she loves to do the singing. And she makes adorable TikTok videos along with her brother and momma.

Aged, 40, Nick and Mariah, 50, first met one another in Antigua while making a music video for her song Bye Bye. After the first encounter, the duo shared a good bond and later tied the wedding knot on April 30, 2008.

The wedding ceremony was held privately in The Bahamas at her residence. On their 3rd marriage anniversary, they welcomed their fraternal twins, a daughter Monroe and son Moroccan Cannon.

The married pair was happily parenting their children. But in 2014, the pair separated and briefly reunited in 2015. Again they filed for divorce and it was finalized only in 2016.

Before Marrying Nick, the singer-songwriter Carey was previously married to music executive, Tommy Mottola, 71. They started a relationship while recording Music Box and tied the knot on June 5, 1993.

But unexpectedly, due to their increasing artistic differences in terms of her albums, their marital relationship started to deteriorate. The couple declared their separation on May 30, 1997, after being together of five years.

Later they finalised their divorce. Shortly, Carey dated a singer Luis Miguel for three years from 1998 to 2001.

She has a half-brother named Golden Sagon Cannon (born on February 21, 2017) from her dad' side. Golden was born via the singer Nick's romantic affair with the American model Brittany Bell.

It was disclosed that the pair began dating in around 2015 while Nick was going through his famous divorce. They first spotted together during a performance at the Maxim Party in January 2015.

Since then it has been found that they are in an on-again-off-again relationship. Despite the end of their connection, they have always been unitedly to watch and nourish their son.

Yes, the Miss Arizona USA 2010 Bell or ex-girlfriend of Nick announced her pregnancy in late June 2020. She took an Instagram to share the big news by posting the photo of her son wearing a superhero cape that read “big brother".

Thereafter, most of the people were waiting to know about the unborn baby father. Later, it was revealed that Nick is the father to be of the baby growing in Bella's bump.

Interestingly, on the other hand, the TV host Cannon is rumoured to be back with his on-again-off-again lover, Jessica White. They first began dating in 2015 but kept their love affairs under the radar.

Meanwhile, Monroe Cannon seems to be following her parents' footsteps. She made her acting debut by making an appearance in the film All I Want for Christmas Is You. Also, she starred on her mother's TV reality show, Mariah's World.

On the other hand, her mother Mariah owns an impressive fortune of $320 million. Throughout her career, she has sold more than 200 million records. Her father Nick has a net worth of $30 million.

On April 30, 2011, she was born as Monroe Cannon Carey. She was named after her mother Mariah's idol, Marilyn Monroe. Additionally, she has a twin brother named Moroccan Scott Cannon.