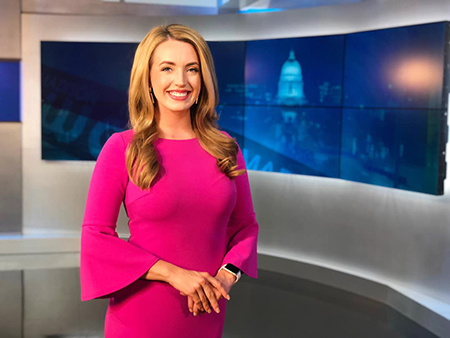 American anchor, Morgan Wolfe is one of the beautiful journalists in the country. The star who started her career as an editor is now serving as an anchor at WMTV NBC 15. Previously, she did intern at several popular networks.

Wolfe was born in the United States. Moreover, she is of American nationality and belongs to White ethnicity.

Morgan Wolfe Is In A Relationship

Morgan is currently dating her boyfriend, Charles Blanski, a sales director at Zebra Athletics. Scrolling her Instagram account, it came out that the lovebirds start their affair in November 2017 and, henceforth, are inseparable.

Wolfe further posts several pictures of them on her social media, which shows their great bond. It seems like her family is also happy with their relationship as Charles is mostly seen in the family pictures posted by Wolfe on social media.

On 5th January, she posted a picture with her partner with a caption, ''Countdown is on until 2020, Old Sport.'' Have a look at it:

After the picture, their fans rose questions whether they are going to married in 2020 or not. However, they speak no words on their wedding plans.

Apart from her dating life, she is also very close to her family, especially with her mother, father, and sister. Recently, in 2019, she, along with her boyfriend, attended her sister's wedding.

Morgan Is A Dog Lover

The reporter is a dog lover and has a pet name, Ralphy. Cavalier is the dog's breed.

Morgan further mentioned that she rescued her dog on Ralphy's Instagram account. Most of the time, she keeps on posting several photos of the pet on her social media.

Net Worth In Thousand

Morgan Wolfe has a net worth of around $500 Thousand to $800 Thousand, which is similar to Daniella Diaz. Her journalism career is the major source of earning. Moreover, WMTV NBC 15 anchor, further, makes an annual salary of $105,060.

Wolfe, in addition, started serving at Hubbard Broadcasting, Inc from January to September 2015. At first, she worked as a digital media intern then became twin cities live intern. Similarly, she did her intern at CBS Corporation and KARE 11.

Since June 2016, she is serving at WMTV NBC 15 as an anchor. On the network, she anchors WMTV's newscast.