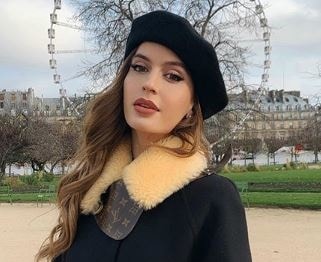 The American star model, Natalia Barulich, is currently the hottest diva in the world. Her great physic and charming personality have led her to achieve a large number of fan following in a certain period. She is popularly known for appearing on the cover of publications like L' Officiel and Maxim.

Having birth sign of Capricorn, Natalia was born on 13th January 1992, in California, the U.S. Currently, she is twenty-eight years old and living her dream. A Cuban mother and Croatian father raised her. In 2012, she was the part of Miss California USA Pageant. One of her earliest modeling endorsements was with the Guess, which is a clothing retailer.

Now, Let's know better about the beautiful and gorgeous Natalia

What is her current Relationship Status?

The beautiful Natalia's dating life is as popular as her career. She has been linked up with many men throughout her career. However, her current relationship status might be dating or single?

Due to the nature of her privacy, it has been hard to identify whether the gorgeous model is in any sort of relationship or enjoying a single lifestyle. However, it has been officially confirmed that she is not fully in the dating game.

Further, she loves hanging out with her friends and family in her free time. And often uploads her great pictures into her social sites account.

Yes, the modeling queen is rumored of dating a football star, Neymar. On Neymar's birthday, she uploaded her and his photo in her Instagram account, where she wished Neymar a happy birthday.

"Everyone knows how extraordinarily talented you are, but if they could only see how real & beautiful you are inside your heart. “You have all my respect and honor babe.”

It took the large media attention to their relationship. The message was even filled with a heart and a kiss emoji.

Later, she even uploaded her single photo where she captioned "When @neymarjr says to dress ‘White Casual’… ta da lol Feliz Aniversário Ney!!”. Though a lot of things might be going on the pair, neither of the party has officially confirmed their relationship. Which led the fans still whether they are dating or not?

One of the most highlighted relationships of Natalia's was with her ex-boyfriend, Maluma. The two are known to be dating one another from 2017. However, in January 2018, Maluma officially confirmed that he was dating Barulich in an interview with Al Rojo Vivo. Both of them enjoyed one another's company very much.

They often posted one another's photos in their respective social sites account where they are seen flirting. However, their relationship doesn't last as long as their career.

Just after enjoying two years of relationship, the pair finally got separated in 2019. Though they are parted from one another, they are still known to be good friends and still haven't deleted one another photos from their account.

Natalia Barulich Net Worth in Millions

Natalia's net worth hasn't been officially confirmed yet. However, it is believed that her fortune is roughly $1 Million. She has gathered all of her earning through her outstanding career. She has been endorsed by many brands and is one of the top-rated models.

Not to forget, she has over 2.7 Million fans following in her Instagram account. And her starred music video is watched by over Billions of people around the world. Currently, her estimated annual income is over $100,000.

Further, her ex-boyfriend, Maluma, is a massive moneymaker and has a fortune of over $12 Million, according to Celebrity Net Worth. And according to Forbes, he earns $600,000 per tour stop on average.