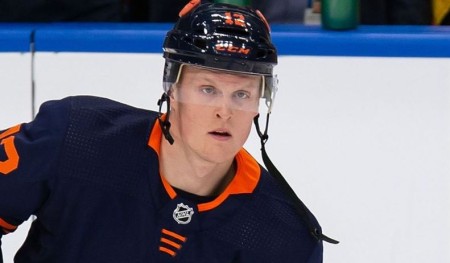 Colby's parents, Allan and Jennifer, his wife, Emily, and a younger sister, Taylor, are left devastated by the loss of their beloved one. Cave's game for the Boston Bruins and Edmonton Oilers is considered one of his best games.

The late Canadian NHL player was airlifted to the Sunnybrook Hospital in Toronto after suffering brain bleed overnight. He was put under the emergency medical induced coma on April 7, 2020. Further, a non-cancerous tumor in the brain called, colloid cyst caused the bleeding in his brain.

After four days of Cave's passing, his wife Emily wrote in a statement:

"It is with great sadness to share the news that our Colby Cave passed away early this morning.Both our families are in shock but know our Colby was loved dearly by us, his family and friends, the entire hockey community, and many more. We thank everyone for their prayers during this difficult time."

Likewise, Gary Bettman, NHL Commissioner, said in a statement: "The National Hockey League family mourns the heartbreaking passing of Colby Cave, whose life and hockey career, though too short, were inspiringly emblematic of the best of our game."

After the news of Colby's tragic demise, his former clubs and teammates took to social media to remember him. Emily also said that the family was not allowed to see his body due to the COVID-19 pandemic.

Loss of a Rising Star

Cave saw time as a captain while playing five seasons with the Western Hockey League's Swift Current Broncos. He had four goals and five assists with Boston and Edmonton.

Oiler's chairman and general manager expressed their grief in a joint statement. Also, the Boston Bruins president offered condolences to Cave's family. Well, may his family have strength in this difficult time.