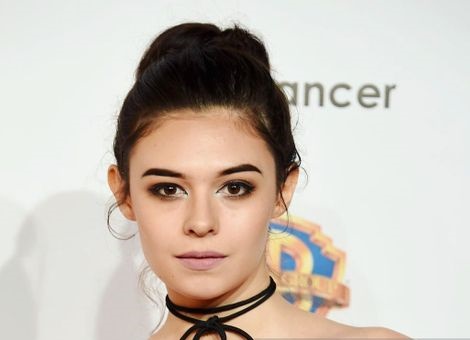 The film industry usually chooses the leading actress or performers to be a woman and male, but there will be a trans superhero for the first time in Hollywood. Yes, it's all real news.

The first transgender superhero ever to appear on TV is nothing none other than American actress, Nicole Maines. She is currently playing the role of Nia Nal / Dreamer on the fourth season of CW's Supergirl, a young transgender soulful lady with a fierce drive to safeguard others.

The star of Supergirl adopted during her birth

Yes, Maines and her identical twin brother, Jonas Maines were adopted by their parents, Kelly Maines, and Wayne Maines at the time of birth. Thus, Wayne and Kelly are not their biological parents but grew up with them in Portland, Maine.

Well, her parents are very supportive and understanding her to transform from male to trans-female.

As we already mentioned, Nicole Maines was born a male, but later she came out as a gender misassigned at the age of 3. She renamed herself as Nicole after the character Nicole Bristow on the Nickelodeon show Zoey 101.

In her elementary school, Maines classmate grandfather complained about Maines using the girls' washroom then she was forced to used staff washroom.  She even held by the Maine Supreme Judicial Court later in June 2014  and her family received $75,000 in compensation for the discrimination proceedings.

In October 2015, she shared about her side of the story, the entire process of transition from male to trans-female in an interview with ABC News. Her adoptive parents revealed that they were always aware of her unusual behavior.  Her mother Kelly stated that she wasn't like a twin brother. Her mom also added that she wanted to dress like a girl and had girl-like conduct.

The 21 years old actress, Nicole Maines is often seen sharing posts related to her boyfriend via social sites. But till date, she has never mentioned his name and other details about him in any of her posts. Seems, she loves to keep her love life within herself.

On 12th  August 2013, Maines tweeted that she never had a boyfriend. However, her one post of Valentine's Day 2013 declared that she might be secretly dating her partner. In the picture, she said:

“He got me just what I needed for Valentine’s Day: a truck load of dang good chocolate. Love him!!!”

Thus, it is very clear that Nicole Maines is in a romantic relationship with someone special in her life. However, she is yet to disclose whether the man she kissed was her boyfriend or not.

Till date, the beautiful transgender girl has not previously engaged in any kind of love affairs or relationship. Also, she is free from her personal and professional life's rumors and conflicts.

Working as an actress, Maines has earned a hefty amount throughout her career by portraying many roles in films as well as in many TV series.  As of now, she has a staggering wealth of $255,000.

Although Nicole's salary is still under review, she starred in hit projects that have undoubtedly paid her appropriate wage enough to live such a luxurious life.

Nicole Maines is currently playing as a superhero in CW series, Supergirl. And she is the first transgender to play in the character of a superhero. In the series, she shared the screen with Odette Annable, Danielle Panabaker, Candice Patton, Michael Mealor and many more.

Get more news on marriedceleb about other Superhero stars.