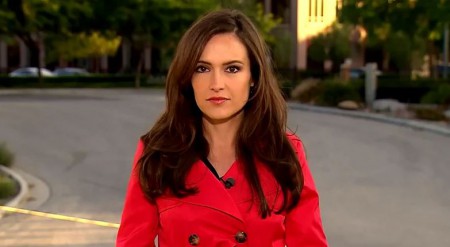 Female news reporters are mostly known for their beautiful personality and professional work ethics. And today we are going to talk about Nikki Battiste, who was recently named the CBS News correspondent. She is now based in New York and reports for all CBS News broadcasts and platforms full-time, including CBS This Morning, CBS Evening News, CBS Sunday Morning, and CBSN, the network's streaming news service.

Who is Nikki Battiste?

The lovely Nikki Battiste is an American journalist who has won Emmy and Peabody-award for her coverage of important events. Her groundbreaking investigations into the 2018 Catholic Church sexual abuse received critical acclaim.

Nikki hasn't revealed her actual birthdate in public nor the media. However, she shared a picture of her parents on January 11, 2018, thanking them for giving birth to her. She mentioned on the caption that she was born in the 80s; therefore, her age might be around mid-thirties.

She grew up in Newport, Pennsylvania along with a brother named Brandon. Her parents' names are Judy (mother) and Nick (father). Talking about her education, she earned her Bachelor's degree in Arts, Politics, Philosophy & Economics from the University of Pennsylvania.

Battiste began her journalism career with NBC in their production department. Likewise, she worked as a producer and reporter at ABC News for six years. She joined CBS News as a freelance correspondent in May 2017 for CBS Newspath.

The CBS News correspondent, Nikki is a lovely woman. She is beautiful and charms the audiences with her charming personality. Talking about Nikki's relationship status, she is already taken. Currently, she lives a blissful married life with her husband.

Nikki is an equestrian and used to ride horses from an early age. In her free time, she loves to play hockey and visits exotic places for vacation.

The gorgeous journalist, Nikki Battiste is married to the handsome soccer coach, Dean Simpson. The couple married in a beautiful wedding ceremony on September 5, 2016, at Oheka Castle in Huntington, New York. The husband-wife duo is yet to welcome a child.

So, how did they meet? Nikki and Dean first met on May 13, 2012, at the Standard Hotel's Biergarten in New York. A mutual friend set them up. The couple realized they had close friends in common and had just missed crossing paths several times.

After dating for two years, Dean proposed to Nikki on May 18, 2014. During that time, she was with her favorite horse, Mojito. Dean then surprised her with a rooftop party to celebrate with her friends and family.

As of 2019, they have been married for nearly three years. The lovebirds love adventures, traveling, and outdoor activities.

As of 2019, the talented correspondent, Miss Battiste has a net worth of $500,000. Throughout her career, Nikki has maintained an impressive amount of earnings. She is still active in the journalism industry; hence, her salary and net worth will increase in the coming days.

Nikki landed in the world of journalism in the year 2000, and as of 2019, she has a nearly two-decade-long professional career. She has worked for high-profile network stations such as NBC, ABC, and CBS. For your information, some of the highest-earning female news correspondents are Kristen Welker and Clarissa Ward.

How much is Nikki Battiste's Income?

Nikki hasn't revealed her actual salary, but as per the records, the average salary for CBS correspondent is around $121,000. Therefore, her annual earnings might be over $120,000.