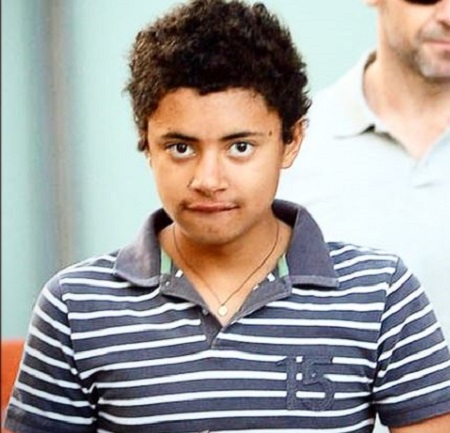 Born as a celebrity kid is one of the best ways in the media industry to gain recognition and respect. Today's topic is about such a famous star kid, Oscar Maximilian Jackman who is known as the adopted son of a well-known Australian superstar couple, Hugh Jackman and Deborra-Lee Furness.

The award-winning Hugh is famous for his role Wolverine/James Howlett/Logan in the X-Men film series. Let's scroll to know more about him in the following sections.

Yeah, the teenager Oscar, aged 20, is overjoyed to have had the opportunity to meet his biological siblings and aunt for the first time. In February 2018, Oscar took Instagram to share the heart-melting family image of the visiting moment with his biological older sisters, Olivia and Nyomi Lanham and aunty.

In the post, he shared a tribute to his aunt and sisters saying "Today has undoubtedly been the most important day of my life". He continued saying: "You are some of the kindest people I've ever met, and I promise I'm not just saying that."

His sister Olivia replied: " I feel like I've known you my whole life. Love you forever and always little brother." Well, Olivia and Nyomi have been raised by their mother Amber Lanham's sister Rochelle in Vinton, Iowa.

At the moment, Jackman is living a happy life along with family in New York. Apart, he has no girlfriend.

After experiencing multiple miscarriages, Hugh and his wife, Deborra adopted Oscar in 2000s. But before he was adopted by them, his biological mother Amber never introduced him to her own family.

She also did not disclose Maximilian's biological father before she died in 2005 by suicide. She was 28. Before she passed away, she spoke out to an American magazine that the only time she sees her son is when he's photographed with Hugh in magazines.

Similarly, Oscar's granddad Thomas Lanham said that he didn't get to see Oscar as a baby. He would still love to see him before it's too late for him, he said to National Enquirer.

Sorrowfully, Thomas died in 2018 after a short illness.

Thee 5 ft 7 in tall, Oscar Jackman came to spotlight because of his parents' popularity. At the present time, there is no exact profession that he is connected with. However, his father, Hugh Jackman has an impressive net worth of $180 million as per Celebrity Net Worth.

Hugh Michael has earned $20 million for portraying Wolverine in the X-Men franchise starring Adelaide Clemens and Alex Young. In 2008, he took home $10 million for his role Drover in film Australia.

He netted another $9 million for his role in Real Steel, $5 million in Les Miserables, $5 million in X-Men: The Last Stand, $2 million in Van Helsing and $2 million in Butter. Meanwhile his mother Furness's worth stands at $50 million which she has earned from her acting and producing work.

Apart from that, Hugh and Deborra paid $21 million for a $40 million triplex apartment in New York City in 2012 .The house has 11,000 square-feet of living space on the 8th, 9th and 10th floors of the property.

He was born on 15 May 2000 in United States to the mother, Amber Lanham. Moreover, he grew up with his sister, Ava Eliot Jackman, who was also adopted as a baby in 2005.

Regarding his education, he completes his graduation from a prestigious New York school, Ross in 2018. Now he joined the University for his further education.