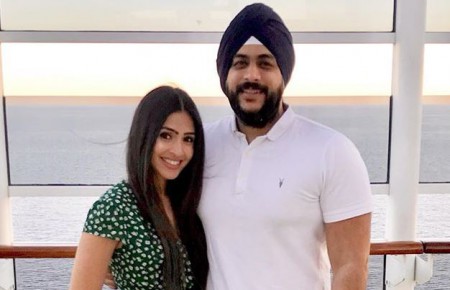 "Having a wonderful family, a sucessful career, and a loving marriage is a blessing." Along with a prosperous career, Payal Kadakia, CEO of ClassPass has a blessed personal life. She is married to a lawyer Nick Pujji. Recently, the husband and wife announced that they are expecting their first child.

Scroll Down and know everything about her love life from her dating to marriage.

Turned Out To Be Best Birthday!!

On February 2, 2014, it was Kadakia's birthday, as well as Super Bowl Sunday, when she met her future husband, Nick Pujji, a lawyer, at a close friend’s Super Bowl party in New York.

It must be love at first sight. Two days later, the pair went on their very first date. If you called this too fast, then you must know that they’d get married someday very soon.

Planned a trip to Greece and landed in Paris

After dating about a year, Artistic Director of Sadance Company and her boyfriend planned a trip to Greece and landed in Paris for a connecting flight.  After some time, she got to know that their flight to Greece had been canceled and they would be spending the night in Paris.

The couple went to one of Payal’s favorite restaurants for dinner where Nick got down on one knee and proposed. The following day, several close friends arrived in Paris to celebrate the engagement. Well, it was all pre-planned by Nick Pujji to surprise her fiance.

An engagement ring that was designed with super-personal touches

Her engagement ring carried so many stories into it. The ring has 15 gemstones on the side which represent the 15 months that they were dating. Further, it consists of their birthstones as well.

Other than that, it has a temple on top that was designed to resemble a temple in India that's both Hindu and Sikh, because she is Hindu whereas her fiancé is Sikh.

What's more, there's a design of necklace which Payal never take off and a bracelet Nick never takes off.

Tradition and culture played a key role in their marriage

Before picking the wedding date, the duo searched for the perfect venue and ultimately picked Pelican Hill.

Payal said, “When we walked into Pelican Hill, we knew it was the place we wanted to get married. The resort is so beautiful with such picturesque views; we kept the décor light to bring out the natural beauty of the location.”

On 30th May 2016, the couple tied the knot. At the wedding, she wore amazing outfits by Sabyasachi with wearing a bracelet from her great-grandmother.

As Payal and Nick are from Indian roots, they wanted to show their culture, background, and religions to the guest. Various events were held over several days. Her top priority was music, dancing, and ambiance. Further, several traditional ceremonies took place during the wedding weekend.

After three years of marriage, Payal and her husband seem to be ready for parenthood. Recently, on 14th September 2019, Payal announced she is expecting their first child, a boy.

May new member in the family adds tremendous happiness and prosperity. We Wish Luck To Pujji Family!!