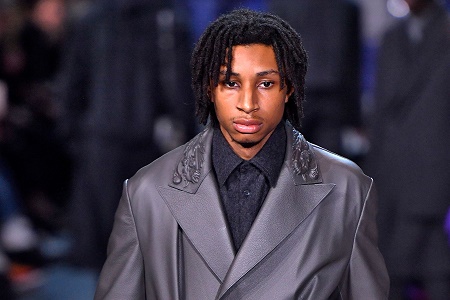 A lot of people get stardom because they are connected with celebrities or superstars. The same is true of Prince Nasir Dean, who got popularity for his rockstar father, Kasseem Dean, known as Swizz Beatz. He is an American hip hop recording artist, DJ, art collector, record producer, and entrepreneur.

He was born to dad Beatz and mother Nicole Levy on October 25, 2000, in the USA. But when he was still a kid his parents split. Now, Nasir Dean is a rising star who goes by NOTEMARCATO, the stage name.

Moving to his personal life, the 19 years old Prince Nasir is reportedly a single man. At present, there is no information regarding his love affairs in the media unlike Elizabeth Ashley Wharton.

It seems he's mainly focused on his career and studies. He recently graduated from the Center for the Performing Arts in Adrienne Arsht. For now, he is the student of the Tisch School of Arts at New York University and the Clive Davis Institute of Recorded Music.

Nevertheless speaking about the love affair of his parents. Swizz and Nicole have never been married but were in a loving relationship for a couple of years. The ex-couple gave birth to a child, Prince Nasir, together.

There is no further information available on the media about their love history so far. Meanwhile, Nasir Dean mentioned his mother, Levy as a superhero, and love of his life by posting the picture on Instagram's day special on May 11.

Yes, you heard the correct. Born and raised in The Bronx, he was previously is in a conjual life to singer Mashonda Tifrere, now 42. The two tied the knot in the year 2004.

The couple's son, Kasseem Dean, Jr., 13, was welcomed in 2006.  Unfortunately, after 4 years of union according to NY Daily News, Dean and Tifrere announced their seperation in 2008. Nevertheless, by June 2008, the pair had been separated by nine or ten months.

In May 2010, their divorce was finalized, citing irreconcilable differences. But, Boston-based Tifrere alleged that his ex-husband had an extramarital affair with Alicia while he was still married to her.

Dad, Swizz Re- Married to Alicia Keys and Have Two Boys Together

After parting ways with his first wife, he remarried to 15-time Grammy Award-winning artist, Alicia Keys.

The couple who began dating in 2008 exchanged the wedding vows on July 31, 2010, in a private ceremony. For their big day, the choose their private home on the Mediterranean Sea in Italy.

American singer, Keys, the bride stunned in an asymmetrical white gown by Vera Wang while the groom wore a tux with a white suit by Tom Ford. In fact, 39, Alicia was pregnant with their first child during the wedding function.

In addition, the R&B singer also shares a daughter Nicole Dean, born in May 2008, with UK-based singer Jahna Sabastian, 33. They first met in 2007 and dated for a while.

Madysyn Rose dating history along with her family details