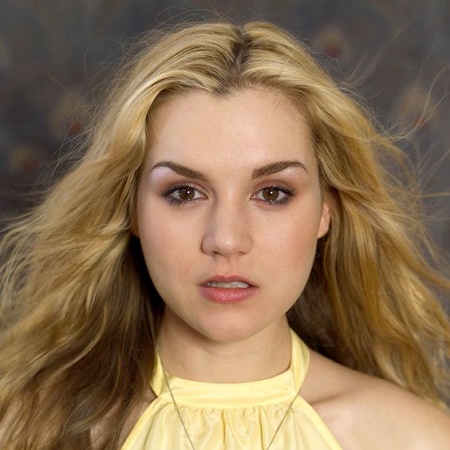 Rachel Miner is an American actress who first came to fame for her role Michelle Bauer on the TV soap opera Guiding Light from 1992 to 1995. In addition to that, she is also known for portraying the Meg Masters in TV series Supernatural from 2009 to 2013.

Rachel Anne Miner was born on July 29, 1980, in New York City. She is the daughter of Peter Miner, an Acting teacher, and Diane Miner. Her grandfather Worthington Miner was an American film producer, screenwriter, actor, and director and grandmother Frances Fuller was an actress. She holds American citizenship and is of white ethnicity.

Got Hitched at Age 17

Yes, the 1.63 m tall actress was once a married woman. She tied the knot with her two years of boyfriend Macaulay Culkin, 39. Born as Macaulay Carson Culkin, he is an American actor, musician, and web host.

At the age of 17, the lovebirds were married in 1998 and also announced their engagement the same year. They originally first met at Professional Children’s School in New York. After two years, Miner and her now estranged partner Culkin parted their ways in April of 2000.

And their divorce was finalized in the year 2002. According to some online sources, it was their young age behind their separation. "It's very friendly and they remain best of friends, the sources added during their period of the split.

Is Rachel Seeing Anyone Since Divorce?

Currently, Miner who made her film debut in Woody Allen's Alice in 1990 is living a single life. But after divorce with her ex- Macaulay, she briefly dated her Bully co-star named Brad Renfro in 20s. But, her new lover Renfro died at the age of 25 in 2008 due to an overdose of heroin.

Macaulay had a love affair with Spanish actress Irene Lopez from early 2011 until 2013. From 2013-2017, he had partnered with American actress and singer, Jordan Lane Price.

Rachel Miner is an American actress who has an impressive $3 Million net worth as of early 2020. She has acquired her total fortune from her more than two decades of career in the screen and film industry. Similarly, her wage is valued to be $57060 per year, which is the average salary of Performer in the US.

As an actress, Miner made her debut in many blockbuster films which turned into massive success in the box office. Her starred 2006's film The Black Dahlia grossed $27.1 Million at the box office. Likewise, her latest show is Chicago Fire, where Joe Minoso and Monica Raymund also featured. Meanwhile, her ex-spouse, Macaulay Culkin has a worth of $18 million.

In 201,  the actress had been diagnosed with multiple sclerosis (M.S.) So, after her diagnosis problems, she toned down her career and also retired from acting.

But in 2019 Rachel announced that she wanted to expand her acting career again in television and film to reflect disabilities. She has also mentioned that she is still both acting and campaigning for the inclusion of characters with disabilities.