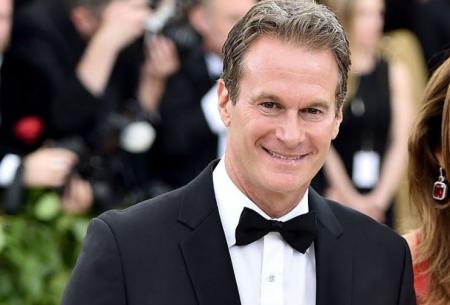 American businessman, Rande Gerber got the biggest compliment for his blissful relationship with a model, Cindy Crawford bounded by leaps of faithfulness and truthfulness. The marital partners have different professions, but the success behind their career achievements are themselves who supports each other without seeing the weaknesses and differences.

Gerber was born on 27th April 1962 in Queens, New York City, New York, United States, and raised in Hewlett, Long Island, NY. He is the beloved child of Jordan Gerber and Ellen Peckman, who believes in the Jewish faith. To know more interesting things about Gerber's personal life in the following points.

The 57-year-old businessman, Gerber is in a happy marital relationship with his longtime marital partner, Cindy Crawford, over the decades. The two married on 29th May 1998 in Paradise Island hotel's room no. 58 in the Bahamas.

The bridegroom was dressed simple wedding dresses, where Gerber was donned in a white plain shirt and dark black pant. On the other side, Cindy wore a spaghetti-strapped, ecru lace mini-confection one-piece dress, designed by Galliano.

The pair later invited their 90 wedding guests, including all of their friends and close relatives in their reception. In the afternoon treat, they served seafood, pasta as well as roast beef and cut off the three-tiered decorated carrot cake to their guests.

After finishing the delicious dishes, the two mesmerized the evening with a dance performance on the popular local band, Bahamen's song. They then booked a honeymoon package for a week before rushing out to busy life.

Couple's First Meeting in their 20s

New York-based entrepreneur, Rande met for the first time when they were in the 20s. During that period, Gerber was linked into a relationship, but he became a close friend to Cindy.

The duo then started dating after spending quality time as friends. The couple, further, engaged quietly and begun planning for the wedding. Since then, the couple are enjoying their love life happily and maintains a good understanding and respect.

More to this, the married couple shared a picture via Instagram when they were sitting on the beachside resort while celebrating their 21st marriage anniversary on 30th May 2019.

Before Gerber's marriage, Cindy was married to an American actor, Richard Gere on December 12, 1991 at the Little Church of the West, enacted by Rev. Wes McPherson in Las Vegas, Nevada. Nevertheless, their marriage only lasted for four years and divorced on 1st December 1995.

The couple's children are now following their footsteps while entering in the field of modeling. Back in June 2016, Presley started modeling after debuting on the L.A. Moschino Resort runway show in June 2016. Similarly, Kaia is also serving with DNA Model and VIVA Model agencies since 2014.

The founder of Gerber Spirits, Rande has a net worth of $300 Million as of 2020. He earns a lucrative salary from his profession. Other than this, he currently runs a private market advertising firm, Midnight Oil, which collects revenue from $25 Million to $50 Million every year.

On the other side, Rande's wife maintains a wealth of $100 Million. She currently receives a handsome payroll from her modeling works. So, her yearly income might be listed in the same range of a high fashion model, which is $48,335 in the U.S.

Lives a Lavish Life in a New Accommodation

Bar and nightlife companies' founder, Gerber and his wife, Cindy bought a lavish house in La Quinta, California for $5.4 Million in June 2019. Their residence captures on 5,978 square feet, including four bedrooms, four and a half bathrooms.

Before residing in La Quinta, the Gerber's family first lived in the Malibu, California-located habitation, which they purchased for $1.85 Million. Likewise, some other celebrities, including Angela Akins Garcia and her husband, Sergio Garcia owned a house in Florida.